The NKyTribune is featuring a player on each of the 21 high school football teams in Boone, Campbell and Kenton counties leading up to the first games of the 2022 season on Aug. 19. We will then provide focused coverage of our local teams throughout the regular season and into the playoffs.

Tayquan and Quantez Calloway were the offensive leaders on Holmes football teams that posted a winning record each of the last three years. One or both of the twin brothers rushed for more than 1,000 yards each season during the successful streak.

The Calloways graduated last spring, but Holmes coach Ben Nevels said senior tailback Curtez Hill is an explosive runner who could put up big numbers for the Bulldogs this year. 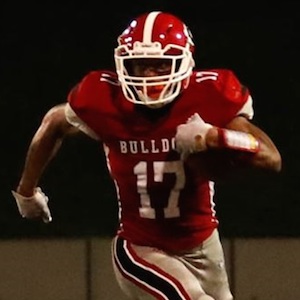 “Coach said he’s wanting to give me the ball for like 20 carries a game so I’ve got to be in shape for that,” Hill said. “I feel like this year is going to be my best year.”

Hill got off to a slow start last season due to a high ankle sprain, but he rushed for 528 yards and eight touchdowns in the final eight games to help the Bulldogs finish with an 8-3 record.

He also returned a kickoff for a touchdown, had a pair of two-point conversions and scored two points on a safety as a defensive back for a total of 60 points that ranked third on the team.

“I owe it all to my speed,” he said of his unique ability to provide points on offense, defense and special teams.

The speed that makes Hill a versatile football player also serves him well in track. Last spring, he was the anchor runner on the Holmes 4×100 and 4×200 sprint relay teams that won region championships and placed fourth in both events at the Class 2A state meet.

During summer camps, Hill ran the 40-yard dash in 4.4 seconds to draw interest from college recruiters. He said he already received a scholarship offer from Thomas More University. The 6-foot-1, 190-pound speedster could attract more offers during the season, but his main focus is extending the Bulldogs’ three-year streak of winning records without the Calloway brothers.

“I feel like there’s pressure on all of us to keep our streak going,” Hill said. “Since losing Tay and Quan there’s a lot falling on us, but we can handle it.”

The other returning seniors for Holmes include running back Emauroyan Arnold, who scored a team-high 11 touchdowns last season, and quarterback Miquel Garcia, who was behind center in the final six games, including a first-round loss in the Class 4A playoffs.

“Coach said we’re actually going to throw the ball a lot more,” Hill said. “Most of the time we’re a running team, but this year we’ve got more speed and a quarterback who can get (the ball) to us.”

Hill also expects the Holmes defense that allowed 15 points and 203 yards per game last season to do even better against the same 10 opponents that are on this year’s schedule.

“I feel like we can hold them to even less,” he said. “With the (defensive) line we’ve got and the speed we’ve got behind them, we should do really good.”