The NKyTribune is featuring a player on each of the 21 high school football teams in Boone, Campbell and Kenton counties leading up to the first games of the 2022 season on Aug. 19. We will then provide focused coverage of our local teams throughout the regular season and into the playoffs.

Campbell County football teams have won only four games in the last three seasons and the Camels were outscored 376 to 135 during last year’s 1-10 campaign. The returning players hope to turn things around in 2022 under new head coach Brian Weinrich with 21 seniors leading the way.

One of the senior veterans is Mitch McElroy, a 5-foot 11, 185-pound linebacker who led the team in tackles last season with 71 (38 solo, 33 assisted) after getting just three tackles in one varsity game as a sophomore. 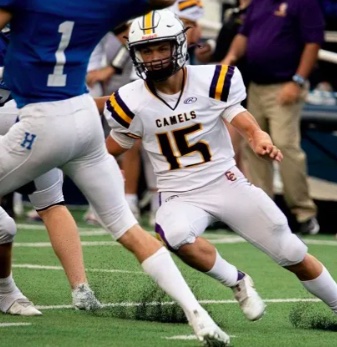 “Sophomore year I didn’t really get an opportunity to play as I was behind Ayden Bauwens, who is now at safety, and Sam Sprinkle, who was a senior, so when he graduated the spot opened for my junior year,” McElroy said.

He made the most of the opportunity by getting 43 tackles in the first six games, including a season-high 12 against Highlands. He was limited to 12 tackles in three Class 6A district losses, but he netted 16 in the final two games.

“I just went out there and did what I always knew I could do but that I never got the chance to do in the years past so I wouldn’t say it surprised me at all,” McElroy said. “I just had to go out there and do what I have always done.”

Weinrich was a defensive coach at Highlands for most of his career, but McElroy said Russell Harden is still the Camels’ defensive coordinator. His goal is to improve on last year’s averages of 344 yards and 34 points allowed per game.

McElroy expects the Camels to make a turnaround with a new coaching staff and the returning seniors. He also said they have some emerging younger talent on both sides of the ball, including quarterback Nathan Smith, who had 817 yards passing and 338 yards rushing as a sophomore last year.

The veterans rejoining McElroy in the the defensive lineup include Bauwens at safety and Hunter Wiseman at linebacker. They had a combined total of 75 tackles last season. Mason Haywood is a sophomore defensive lineman who is “talented with quick feet and a lot of power,” according to McElroy.

Campbell County’s first preseason scrimmage game on Friday will be against Beechwood, the two-time defending Class 2A state champions. It’s an opponent that will test what the Camels have been working on since Weinrich became head coach.

Two weeks after that scrimmage, Campbell County will open the season against Newport Central Catholic, the only team the Camels defeated last season before losing 10 in a row by double-digit margins.