“Devin White And Lavonte David Got To Be The Happiest Football Players In The History Of The National Football League” – JoeBucsFan.com 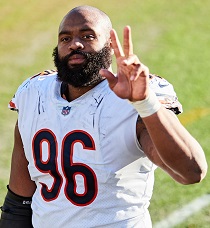 And no, it’s not his quote in the headline.

Joe is referring to Louis Riddick, a top ESPN analyst who fans got to know better after he got a gig in the Monday Night Football booth. Riddick was on NFL Live yesterday hyping Hicks as a real difference-maker for the Bucs.

“This guy is unblockable and is nasty. You thought you had a tough time running the ball on the Tampa Bay Buccaneers in the past; this guy is the truth now. I’m telling you,” Riddick declared. “One year and up to $10 million, Jason Licht (claps) great job. You keep him healthy, I’m just telling you, man, you ain’t running it on them anymore in 2022, as you did in the past two years.”

Again, Riddick was a defensive back and a top suit for the Eagles, though he didn’t work with Licht in Philadelphia.

Former guard and Tom Brady teammate Damien Woody followed Riddick by noting that quarterbacks will not be able step up and throw if Vita Vea and Hicks are rushing the passer together. And Woody agreed with Riddick’s take on the upgraded run defense.

“Devin White and Lavonte David got to be the happiest football players in the history of the National Football League playing behind Vita Vea and Akiem Hicks,” Woody said.

It’s all about keeping Hicks healthy. He’s battled injuries and missed a lot of time over the past three seasons with the Bears.

Also, Joe’s hearing chatter out of Chicago that Hicks can be a head case at times and is not consistenly motivated. Joe’s not worried about that with Tom Brady on the roster and the stability of the Bucs’ locker room and head coach.