At 70, he became the oldest man to row solo across the Atlantic. He is also one of only 10 sailors to circumnavigate North and South America, and has climbed Mount Kilimanjaro.

He has beaten prostate cancer, built the world’s only coal-powered Land Rover and has gone from an impoverished upbringing where he would stuff cardboard into his school shoes to fill holes in the soles to owning one of the country’s leading manufacturers and suppliers of portable cabins.

It is safe to say Frank Rothwell enjoys a challenge – which is handy given he has just paid £12m for a Premier League founder member about to start the first campaign in its 127-year history outside the football league. 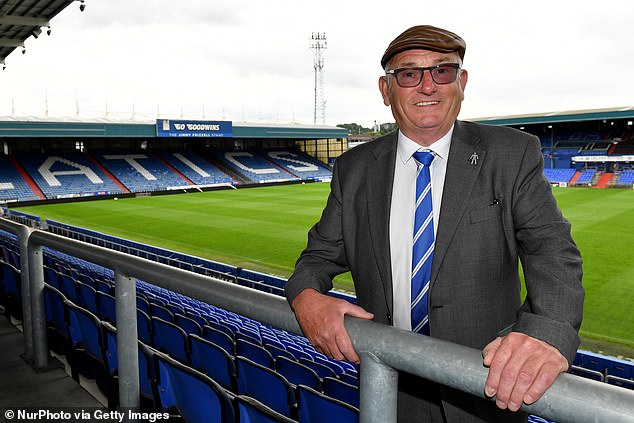 On Thursday, at a brilliantly bonkers press conference, the flat-cap wearing 72-year-old with a broad Lancashire accent was unveiled as the new owner of Oldham Athletic. It featured free pies, pints of bitter, debates a vow to improve the standard of ladies’ toilets at Boundary Park and an interruption when it turned out hundreds of fans – who have endured sheer misery under the previous regime – had noisily gathered on the car park outside to celebrate. There was also an impressive version of Dion’s The Wanderer.

The unbridled joy was understandable. This was a day Oldham’s long-suffering supporters thought they would never see. Indeed, when Rothwell – who has lived in the town for more than 50 years – stepped in to save the day the stricken club was hours away from liquidation. Following top flight relegation in 1994, Latics fell from the Championship (then Division One) in 1997. 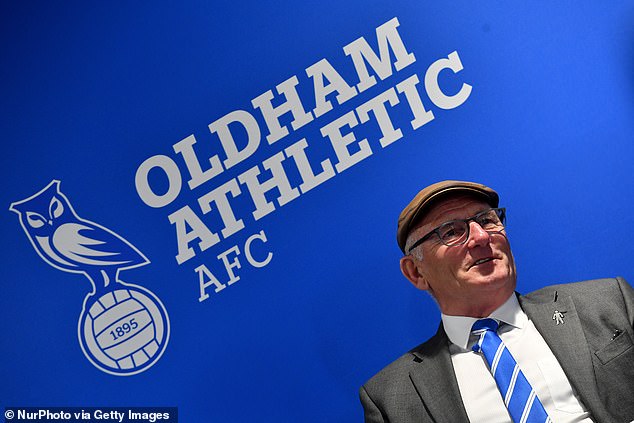 Twenty one years followed in League One, before Moroccan-born, Dubai based Abdallah Lemsagam took over in 2018 and accelerated the decline via series of horrendous decisions – including installing his brother Mohamed as sporting director – which put the club on the brink of extinction. In four years of madness, 12 managers were appointed and two relegations masterminded. Scores of below-par overseas players came and went. Pension contributions were not paid and there were constant allegations of interference in team selection.

Oldham’s final game in the league was interrupted when desperate fans invaded the pitch. When it restarted, stewards were instructed to hold up advertising boards to block the view of fans who had remained in the bar of the Joe Royle Stand for an impromptu wake. It had become a club that tried to stop its own supporters from watching it. 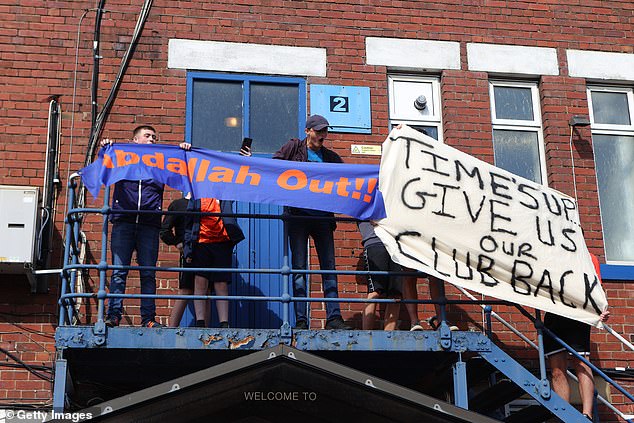 The first question for Rothwell is the obvious one. Why? ‘I love a challenge,’ is the equally obvious answer. ‘Look, I had to save it. I’ve lived here for more than 50 years. My kids were born in the hospital next to here. I love the town and the people. I couldn’t be the person who could have saved it but didn’t.’ There are challenges and there are challenges. ‘This is the biggest one because I’m not in control of everything,’ Rothwell explains.

‘When I’m rowing across the Atlantic I’m in control of how far I’m going to go that day. It’s a bit rough today, am I going to continue rowing or go for safety and put the sea anchor out? I’m in control of that. Here, there are so many things I’m not in control of. But hopefully I can influence things, we’ll get good people on board and (manager) John (Sheridan) seems to be up for it.’ 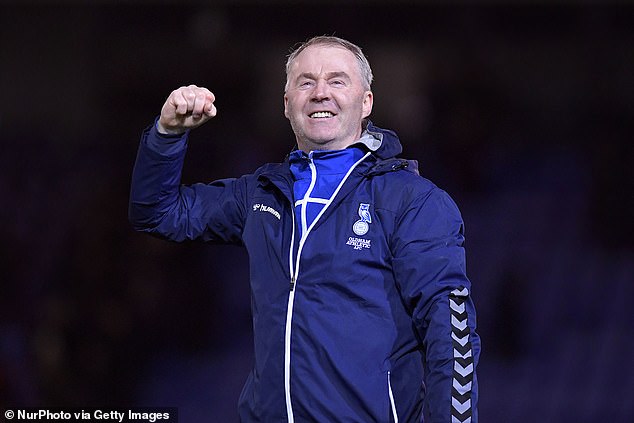 John Sheridan is in his fourth spell as manager of Oldham, with the crowd supportive of him

Given the eccentricity on display, it could be easy form an inaccurate opinion. Rothwell may make for great quotes and great television (he was the star of Bear Grylls survival show in 2017), but underneath the outlandish exterior is a smart, savvy and successful businessman who surrounds himself with the right people. It appears as though he has done that here. His children, Luke and Sue – who now run family firm Manchester Cabins – are on the board.

They are joined by Darren Royle, installed as chief executive. Royle, son of Oldham legend Joe (who will also be on the board), lives in the town and last year had a season ticket. In desperation he turned up at Rothwell’s house to ask if he knew any local business people who would be interested in forming a consortium and started this process. Also present are the experienced, highly-rated solicitor Peter Norbury and ex-Saatchi and Saatchi chief executive Kevin Roberts. They mean business.

Around £9m of the £12m spent went on the stadium and the surrounding land and there are grand plans to generate revenue streams. There is talk of a cricket and netball academy in a town which excels at both sports. There is also the potential the neighbouring hospital brings, with a car park one of the many options being explored. Do not bet against the town’s rugby league club, also enduring historic hard times, basing themselves at the site. On Monday, season tickets go on sale. The feelgood factor may trigger unprecedented levels of uptake. 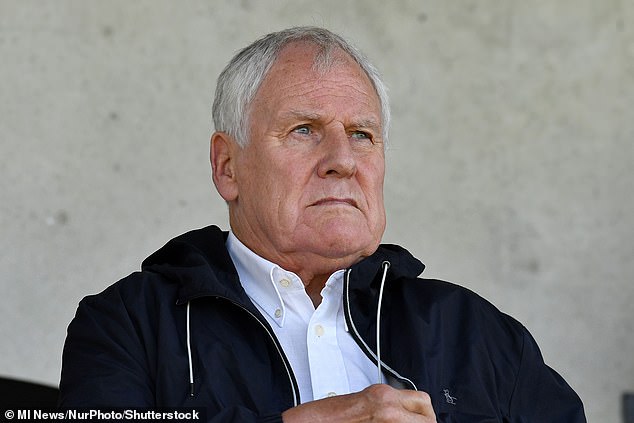 Joe Royle, a legendary figure at Oldham, will be on the board with his son Darren as chief executive

The day before the takeover was confirmed, with the strange feeling of optimism in the air, the club shop took £7,000 on new away kits. When Sheridan returned in an ultimately fruitless attempt to keep Oldham in the league, crowds went through the roof, with more than 8,000 present for a derby against Rochdale, and more than 7,000 in for the fixtures with Bradford and Carlisle. Rothwell will take a back seat. ‘What can I do?’ he says.

‘All I’d do is interfere. Darren is really enthusiastic about this and he will be chief exec and run things on a day-to-day basis. We’re really happy with John (Sheridan), the fans love John and if he’s got that enthusiasm I think we’ll be all right.’ At this point there is a knock on the door of the box we are in and Cameron Whitworth, drummer with raucous fans’ group the Athleticos, steps in. Rothwell greets him like a long-lost son. ‘You are the reason why we bought this club, do you know that?’ he says. ‘At the Leyton Orient game we came to – all the way through we thought the noise was a recording – there was no stopping. It’s great to meet you.’ ‘And you,’ the drummer responds. ‘More so.’ 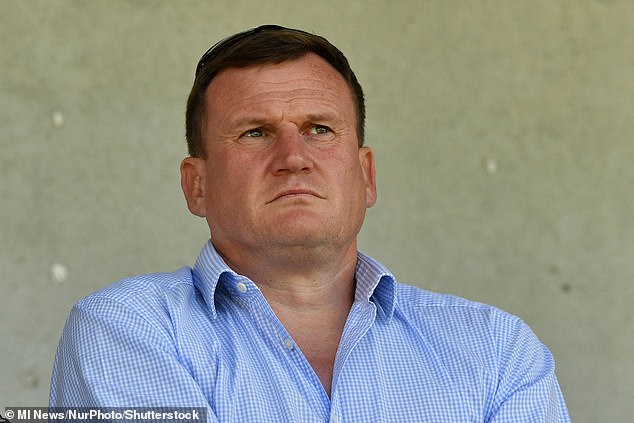 It is the second unprompted interruption of a surreal afternoon. The first was when Rothwell went to meet crowds outside, including a family holding a cardboard sign which read ‘We’ve got our club back.’ They have. ‘If there’s something good happening people want to jump on the bandwagon,’ says Rothwell. ‘Once it becomes hip and you get that buzz around the town. “Are you going?”. You come to the game and then you go for a couple of pints on the way home and it becomes a thing. Darren started coming halfway through last season and our son-in-law Jimmy joined him and it was a day out. Once you create something, people want a part of it.’

Frank leaves to speak to the BBC and his wife and childhood sweetheart Judith walks in. The pair cut short a trip around Holland, Germany, Austria and Italy on a trike on which they have done 30,000 miles in nine years (with a converted beer barrel carrying their belongings), catching the Rotterdam to Hull ferry, to be here. ‘We were in the boardroom at the Orient game and nobody was speaking to the people from Orient who drove five hours to be here,’ Judith says. ‘I felt sorry for them. Our Luke said just after the game, “can’t we just buy them?” We said: “you must be joking”. But then Darren came – we couldn’t have done it without Darren. The club has had negatives, negatives, negatives over the last ten years, there’s no positives. If a local businessman hadn’t bought it, I don’t think it would have survived.’ A town and its football club are eternally grateful that he did.