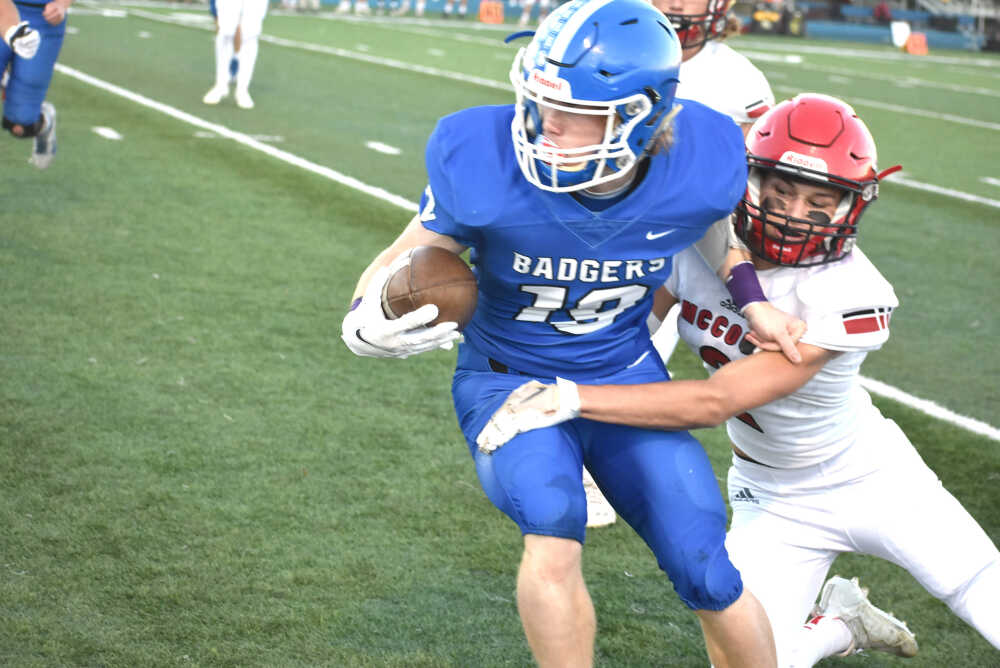 McCook Bison alum Nathan Renner’s about to bring down a Bennington Badger during the Class B state football playoffs last fall.

Plus theres nothing quite like candy to make an impact on any young person.

This guy was born with basically no hands, and hes literally throwing sacks of candy into the crowd with good velocity, McCooks Nathan Renner said about a Shrine Bowl trivia contest between the North and South teams this week. It actually made my hand sting a bit when I caught one. You wonder how does he do it and he says you just have to make the best of a situation. No limits. 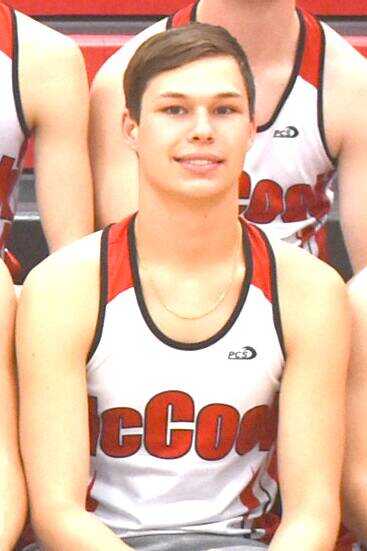 Despite injuries, McCook senior Nathan Renner was part of the McCook Bison boys track and field team that finished No. 4 in Class B last month.

Renner has brought a similiar attitude to his Bison football playing career.

Kickoff is set for 6 p.m. at the University of Nebraska-Kearneys Ron and Carol Cope Stadium.

What would be the Bison team captain and 2021 Homecoming Kings best dream for this game?

That we would get up about 24-0. Because when the lead is 17 points or more, the defense gets to stay on the field and play until it gets closer again, the defensive back proclaimed.

In other words, Nate loves to play football.

Even with a broken hand suffered during last season, Renner made 46 tackles (30 solos) and broke up five passes to earn Class B all-state honorable mention.

One of his memorable final McCook plays was a leaping pass deflection against eventual Class B state champion Bennington.

Nate was a team captain and a great leader both on and off the field, McCook coach Joe Vetrovsky said as the Bison battled to yet another Class B state playoff spot. Hell do a great job representing our football program (at the Shrine Bowl) and the community of McCook.

Renner has found Shrine Bowl practices all week in Kearney to be very intense  even an upgrade from a perennial football power like the Bison.

Guys are cheering after every play. Theyre cheering all the time. The intensity keeps flowing, he said. Theres a lot to learn in a week. Our defense is a lot different that what we did at McCook.

And these receivers come at you every play, Renner added. Theyre all great athletes. If you are not ready (as D-backs), they will poster-ize you.

Hitchcock County coach Randall Rath is an assistant for the South squad.

He played quarterback all four seasons including the historic 2020 DC-S state title run in D-1.

Myers will be part of that South defense taking on North team stars like Benningtons Dylan Mostek, Burwells Caleb Busch and many other top players from Class A to Eight Man-2.

I wasnt thinking about Shrine Bowl when I started my senior year, Renner admitted. I was just taking it day by day and game by game. But its quite an honor to play this one last time.

Renner wont be going to far away from Bison football. He plans on attending McCook Community College these next two years to pursue an Emergency Medical Technician license.

Nates ultimate goal: another paramedic in the Renner family.

You have to bring the intensity every day and like my dad says…you have to be prepared for the very worst, he said.

Perhaps thats why the Shrine Bowl helps Nate understand and appreciate what this classic event is all about.

Theyre facing all sorts of illness, yet Nate marveled how they played and clearly enjoyed every moment of this visit.

They were smiling from ear to ear, he proclaimed. The (football) game is OK. But our real goal is help the Shriners raise money for their facilities and care so they can help these kids prosper as much as they can in life.