As we’ve already acknowledged, the distinction between ‘attacking midfielders’ and ‘forwards’ is increasingly blurred, but our basic rule here is that as well as your few remaining No 9s this list is also where your wingers and wide forwards end up. We broke that rule more than once, mind.

10. Cristiano Ronaldo (Manchester United)
Fine, if we must. It’s all a bit Wario ‘But at what cost?’ meme, frankly. But even we are not going to be so churlish as to ignore the third highest scorer in the entire league on the frivolous grounds that the collateral damage has been the complete collapse of Manchester United Football Club. Eighteen goals is 18 goals and it’s not his fault his teammates are all useless. Although actually it might be his fault a bit. Also up to you whether you consider ‘Helping poison the well at Manchester United so thoroughly they become a national laughing stock and finish 13 points behind Spurs’ a positive or negative when weighing up someone’s contribution to the season as a whole.

9. Teemu Pukki (Norwich)
FUN FACT: Scored 11 goals and got three assists in Norwich’s 2019/20 relegation season and then did exactly the same thing in 2021/22. Now 11 goals and three assists aren’t huge numbers. Not bad, but not huge. But in the context of a genuinely horrific Norwich side there is a decent argument that it represents the standout achievement of the entire season for any player. Bit much? Yeah, probably, but the facts are that Norwich scored 23 goals all season – 11 fewer than anyone else, even Watford. Even Burnley. Fourteen out of 23 goals scored or assisted by one player. That’s 61 per cent. That’s a landslide. And he’s done it twice now (Norwich, in fairness, managed a whole 26 goals in 2019/20).

He’ll probably now score 25+ goals as Norwich get back in the Premier League next season because, again, that is what he and they do. He got 29 in 18/19 and 26 in 20/21. He’s just about the most reliable striker in the world, really. But at the same time you do wonder if there isn’t a bottom-half Premier League team with an actual chance of survival that isn’t thinking they could do with a striker who offers the closest thing to a guarantee of a reasonable number of goals in even the very worst of Premier League teams. One year left on his contract, by the way.

8. Diogo Jota (Liverpool)
Coming into this Liverpool attack and improving it really is quite the thing, and it’s one that Jota has accomplished with some panache in the last couple of years. And his return of 15 goals and six assists in the Premier League this season could have been even better given he had the misfortune to find himself injured and missing out on 5-0, 3-1 and 6-0 wins over the porous defences of Watford, Norwich and Leeds. No stat-padding here.

7. Ivan Toney (Brentford)
It is historically not easy for prolific lower-league goalscorers who enter the Premier League relatively late on in careers to hit that higher ground running. Even the great Jamie Vardy scored only five in his first top-flight campaign. But Toney has been excellent in a Brentford side that started in fine fettle and overcame a mid-season wobble to finish nice and cosy in mid-table. No surprise that his best run of the season coincided with the arrival of Christian Eriksen to help create better and more frequent chances, but in a league where few true No 9s remain, Toney has slotted straight in among the best of what’s left. No goals in his final six games of the season meant it was a slightly underwhelming finale on a personal level, but it shouldn’t undo the good work that had gone before.

6. Harry Kane (Tottenham)
Spent a good third of the season in a massive huff about not being allowed to go off and win stuff with Manchester City, but ended it playing a full part in Spurs’ late run to Champions League football and with another set of daft numbers for the collection. After 14 games of the season – deep into December – Kane had only one goal and one assist to his name and both of those against a Newcastle side at the time so very disastrously bad that it barely even counts. And yet he still ended the season with 17 and nine to prove that even just about the worst possible Kane season is still better than just about anything anyone else in this division can muster.

By season’s end as he and Spurs were transformed by Antonio Conte, he was right back to his very best, with his two goals and all-round play in the staggering 3-2 win at Manchester City in February arguably the best individual performance from any player in the league all season. It sparked a run of 12 goals and seven assists over the final 16 games of the campaign and sent a fresh load of records tumbling. Only four players have scored more Premier League goals than Kane’s 183 and two of those – Sergio Aguero (184) and Andy Cole (187) – will be reeled in pretty quickly. Kane’s rediscovered happiness at Spurs means he will also soon go past Aguero and Wayne Rooney for most Premier League goals at a single club. 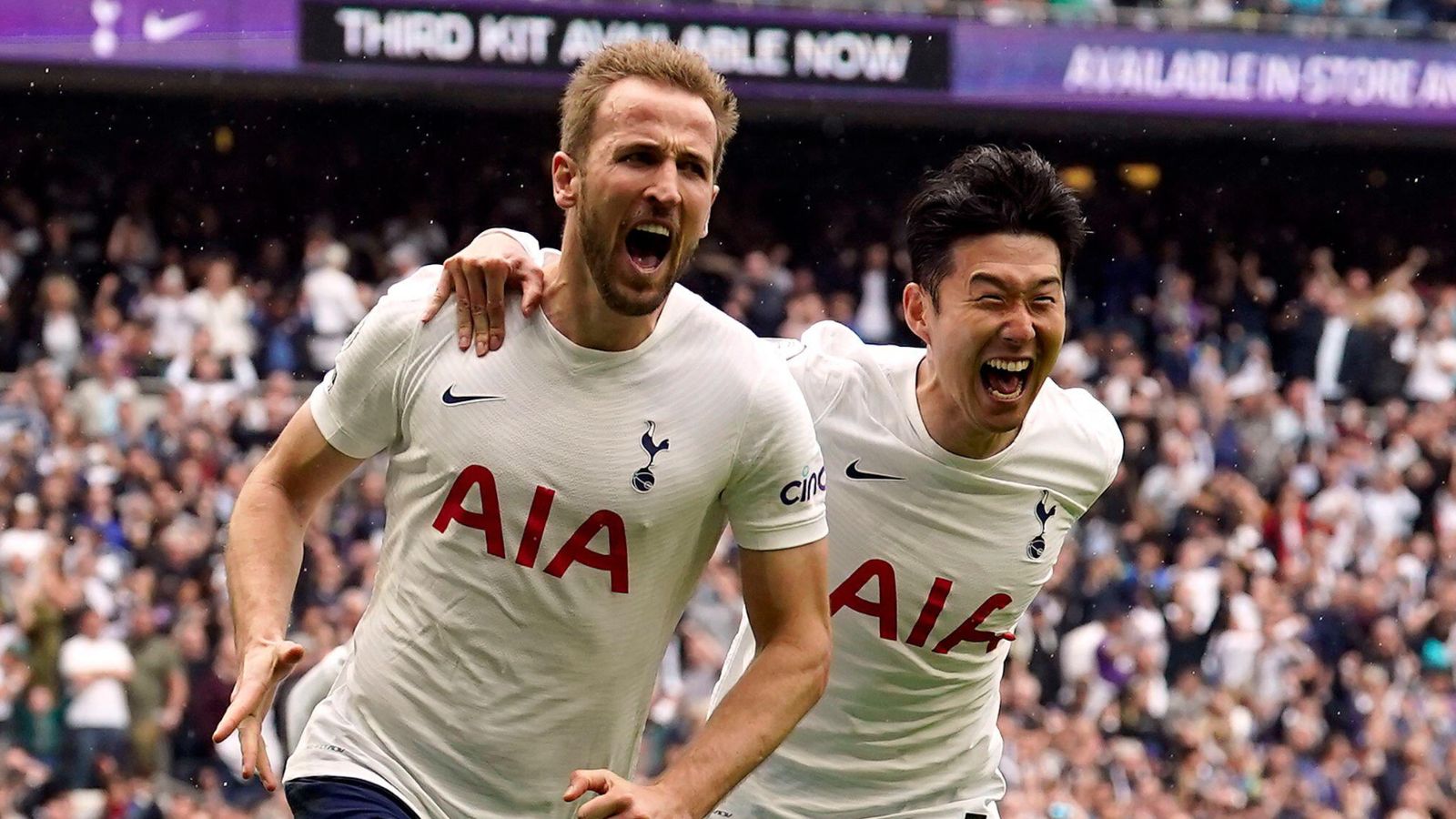 5. Jamie Vardy (Leicester)
He just keeps going and he just keeps scoring goals. As littered as Leicester’s recent history is with extraordinary and improbable happenings, the livewire Vardy showing no real signs of decline at 35 is right up there. He was always a cleverer striker than given credit for, far more than a run-off-the-shoulder-of-the-last-man-and-smack-it-in-the-goal merchant. And you can still make a very strong statistical case for Vardy being the best of the remaining No 9s fighting against the dying of the light not just of their own careers but that of their entire position.

But for a couple of injury setbacks – hamstring and knee issues ruled him out of 11 games between January and April – he may well have walked off with a second Golden Boot. He scored his goals at a rate of one every 120 minutes – as good as Salah and better than anyone else to reach double figures – and a chance conversion rate of 32 per cent bettered (and then just barely) only by Heung-min Son among the league’s top 20. If he can keep going for another year he could well reach 150 Premier League goals and slide into the all-time top 10 having not scored the first of those goals until the age of 27.

4. Jarrod Bowen (West Ham)
One of those lovely seasons where obvious potential and talent properly blossoms into the real deal. Bowen ends the season alongside Salah and Mason Mount as the only players to reach double figures for both goals and assists and with a place in the England squad that would surely have come sooner but for a poorly-timed ankle injury. As well as the obvious all-round excellence of his work this season, it’s also striking that many of his best performances came against the division’s biggest hitters. Four of his 12 goals and four of his 12 assists came against the Big Six – including both goals in the 2-2 draw with City and a pair of assists in a memorable 3-2 win over Liverpool.

3. Sadio Mane (Liverpool)
All Liverpool players have, by definition, had a pretty extraordinary season given how historically close they came to a quadruple and the basic general excellence. But it’s been a truly career-defining campaign for Mane when you chuck his Senegal achievements in on top of everything that’s happened for Liverpool. The dramatic World Cup qualification and especially the African Cup of Nations win – both at the expense of Egypt and Salah – mean it really has been quite a season. But even if we restrict ourselves to just the Premier League it’s another fine season and a return to peak goalscoring form after last year’s slight dip. Has now reached double figures in all eight of his Premier League campaigns, which I’m sure we can all agree is the real quiz. Now, like Salah, attention turns to the thorny issue of that fast-expiring contract.

2. Mohamed Salah (Liverpool)
Looked understandably thrilled to be handed his third Golden Boot award minutes after Liverpool missed out on the Premier League title and we don’t think it was because he had to share it with Son. Did one of them get a golden left boot and one a golden right boot? We should be told. Anyway. Pretty extraordinary season for a pretty extraordinary player, repeating Kane’s trick from last season in also scooping the playmaker award for his 14 assists, while unlike Kane also managing to win some actual trophies even if his scrambled late goal at Wolves delivered only personal glory and not, as he initially seemed to think until the City score was relayed to him from the stands, a third step on the road to the quad.

His 23rd and final Premier League goal of the season was probably the scruffiest of a collection that included some truly astonishing ones, most notably that mazy run and millimetre-precise finish against some tinpot team called Manchester City. Also scored five goals in two games against Manchester United, which will always be well received by Liverpool fans no matter how far below them their old rivals sink. Probably deserves top spot here really, but loses out on the harsh but undeniably fair criterion that scoring 23 goals for this Liverpool team is slightly less impressive than scoring 23 goals for this Tottenham team, which brings us to…

1. Heung-min Son (Tottenham)
Just a brilliant, brilliant season from one of the Premier League’s most brilliant players. It’s become an absolute cliché over the course of this campaign to note that he remains under-rated and under-appreciated but the mad thing is that even after reeling in a huge deficit to take a share of the Golden Boot with Salah it is still the case. Even in this season when he finally became Spurs’ star man and stopped being the Ernie to Harry Kane’s Eric, the McCartney to his Lennon, the Broad to his Anderson, it still doesn’t seem to have fully sunk in that he is one of the very best footballers on this planet. Hard to think of a better finisher in the world right now given Son’s absurdly clinical goalscoring – his 23 Premier League goals came from a mere 86 shots with no penalties – and genuine two-footedness. It is frankly absolutely crazy that Spurs have never really faced much of a struggle to keep him.