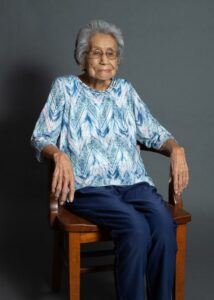 Geraldine Sarah Jackson Thompson, of the Painttown Community in Cherokee, went home to be with the Lord, Tuesday, June 7, 2022. A native of Jackson County, she is the daughter of the late Ed Jackson and Marjorie Arneach Rattler.

Geraldine was a member of the Rock Springs Baptist Church of which her grandparents Jefferson and Sara Arneach founded in Cherokee. She retired from the Indian Health Service as an LPN serving for 30 years.  She was also a member of the Cherokee Indian Rescue Squad, a member of the North American Indian Women’s Association, Lions Club, and the eldest member of the American Legion Auxillary Steve Youngdeer Post 143. She was an avid bowler, cornhole, horseshoe, bocce, and shuffleboard player, especially in the Senior Games, of which she won many gold, silver, and bronze medals.

A very important group she belonged to is the Cherokee Cancer Support Group at Betty’s Place. She was a boarding school survivor. She proudly worked with volunteers on the Fall Festival Committee.  In younger years, she was active with the Painttown Community Club, and served as a Painttown Representative on the Cherokee Central School Board.  She also danced with the Tsali Manor Clogging Team. The highlights of her year was watching the Cherokee Braves basketball and football teams, of which she was a dedicated fan. She was also very proud of her Cherokee heritage.

All the children in her life were special, especially: Duck Lossiah, Josh Lossiah, Bobby Crowe, Chet Cucumber, and Tasha Cucumber. Geraldine was a Christian, loving mother, sister, aunt, cousin, grandmother, and friend who will be dearly missed.