Everyone in the Premier League has a ridiculous amount of financial muscle, but they might not have the same pull as the so-called ‘big six’.

Here is one player per club that should be scooped up by one of the big boys this summer.

Arsenal – Bukayo Saka
Saka has the ability and potential to play for anyone in the top six. Having played all 38 of Arsenal’s Premier League games this season, Saka scored 11 goals and provided seven assists. The England winger has been linked with a move to Liverpool this week, and with Sadio Mane leaving, he could be an incredible replacement – although Mane played centrally for much of 2021/22. The Gunners need to do all they can to keep hold of Saka, and they are hoping he will sign a new contract this summer, but without Champions League football, you never know; it could be hard for him to turn down the Reds or Manchester City.

Only Mason Mount (21) had more direct goal contributions by players aged 23 or under in the Premier League this season than Bukayo Saka.🥈

Aston Villa – Jacob Ramsey
One of the most promising youngsters in the Premier League, Ramsey made 34 top-flight appearances this term and was voted Young Player of the Season by Villa supporters, and Player’s Player of the Season by his teammates. I don’t think that there are too many doubts over Ramsey’s ability to step up and contribute for a top-six team, but like Saka, his club will be very eager to keep hold of him for the long run.

Bournemouth – Jaidon Anthony
After making seven appearances in 20/21, Anthony played a big role in Bournemouth’s promotion from the Championship this season. The young winger is out of contract next year and the Cherries could potentially cash in this summer, although I’m sure they will be prioritising fresh terms. After being released by Arsenal, could one of the big six take a chance on Anthony?

Brentford – Ivan Toney
Toney has gone from strength to strength since leaving Newcastle in 2018. He starred for Peterborough in League One and earned himself a move to Brentford. He then shone in the Championship as the Bees earned promotion last term. After a stellar maiden campaign in the top flight, Toney can perhaps consider himself unfortunate not to be called up to the most recent England squad. Arsenal and Tottenham are both in need of a new striker, and Toney could be open to leaving having been caught on video cursing out his current employers.

Brighton – Marc Cucurella
The first player here with a somewhat believable transfer link, Cucurella is reportedly a Manchester City and Chelsea target. Given his performances for Brighton this season, it is no surprise. Having arrived from Getafe last summer for around £16m, the Seagulls can comfortably double their money as Pep Guardiola aims to improve his left-back depth. So does Thomas Tuchel, with Marcos Alonso looking to be off.

That is not a normal heat map for a left centre-back. 😂

Chelsea – Christian Pulisic
Christian Pulisic and/or Hakim Ziyech could be off this summer. As could Armando Broja, Timo Werner and/or Romelu Lukaku. However, we have chosen Pulisic. It was tempting to opt for Conor Gallagher, but I genuinely believe that Tuchel will give him some solid minutes next season. Back to Pulisic – he only started 20 matches across all competitions in 21/22 and it would be understandable if he wants a new challenge. The American winger has produced in fits and starts, but the potential is there if he is given sufficient minutes. Who out of the big six would take a chance on him? Perhaps Arsenal? They do love a Chelsea ‘reject’.

Crystal Palace – Tyrick Mitchell
A promising young full-back left Crystal Palace not so long ago for a team in the big six, and that has gone absolutely horrendously so far. Lightning never strikes twice, right? So Mitchell is guaranteed to be a success should he make the step up to a top Premier League club. Given Ben Chilwell and Kieran Tierney’s injury concerns, Arsenal or Chelsea could be a good move, as could Manchester United. Don’t do it, Tyrick. Don’t do it. Basically every team in the big six could do with a new left-back as it goes, except for Liverpool, who have Andy Robertson and the Greek Scouser himself, Kostas Tsimikas.

Everton – Anthony Gordon
Richarlison and Dominic Calvert-Lewin have both been linked with Arsenal, with Man United reportedly keen on the former. Despite this, I have gone rogue and suggested up-and-coming winger, Anthony Gordon, for a move. He was superb for Everton as they fought off relegation, and given his set-piece ability, bravery and overall sh*thousery, a summer transfer to one of England’s representatives in Europe could be fun.

Fulham – Rodrigo Muniz
Although random Brazilian forwards tend to be signed by Premier League clubs (or Real Madrid and Barcelona) from their homeland, the only player that really fits the bill from Craven Cottage is Muniz, who scored five Championship goals in 25 matches this season. Fulham paid around £7m for the 21-year-old and if our very own Ian Watson thinks he’s good enough to thrive in the top flight, then so do I.

Leeds – Kalvin Phillips
Phillips is not just a plausible transfer given Leeds’ poor season, but he would comfortably play a big role for any of the teams in the top six. Aston Villa and West Ham have both been linked with the England midfielder, but with all due respect he should be aiming higher. As well as the aforementioned trio, pretty much all of the big boys are also said to be interested. If Arsenal or Spurs can pull this one off, it will be huge for them.

Vital to his side 💪 #LUFC 👀 pic.twitter.com/Jr2OaSbEAA

Leicester – Youri Tielemans
Speaking of Arsenal, they are the frontrunners to sign Tielemans, who is out of contract next year. He has been exemplary in his professionalism during his time at Leicester, with it clear that he wants a new challenge. The Gunners need a central midfielder and the Belgian would be a great upgrade on Granit Xhaka, as would Phillips.

Liverpool – Joe Gomez
Game time has been scarce and whether or not it is to a top-six team – for whom he could definitely do a good job – Gomez needs to leave Anfield for the benefit of his club and international career.

Manchester City – Gabriel Jesus
Sometimes a step down is needed for someone to thrive, and it is for the best that Jesus departs City, given their recent transfer business. He has the opportunity to work with Mikel Arteta again and lead the line for a team challenging for Champions League football. Although to some it is not the right move, it makes sense for the player and club. 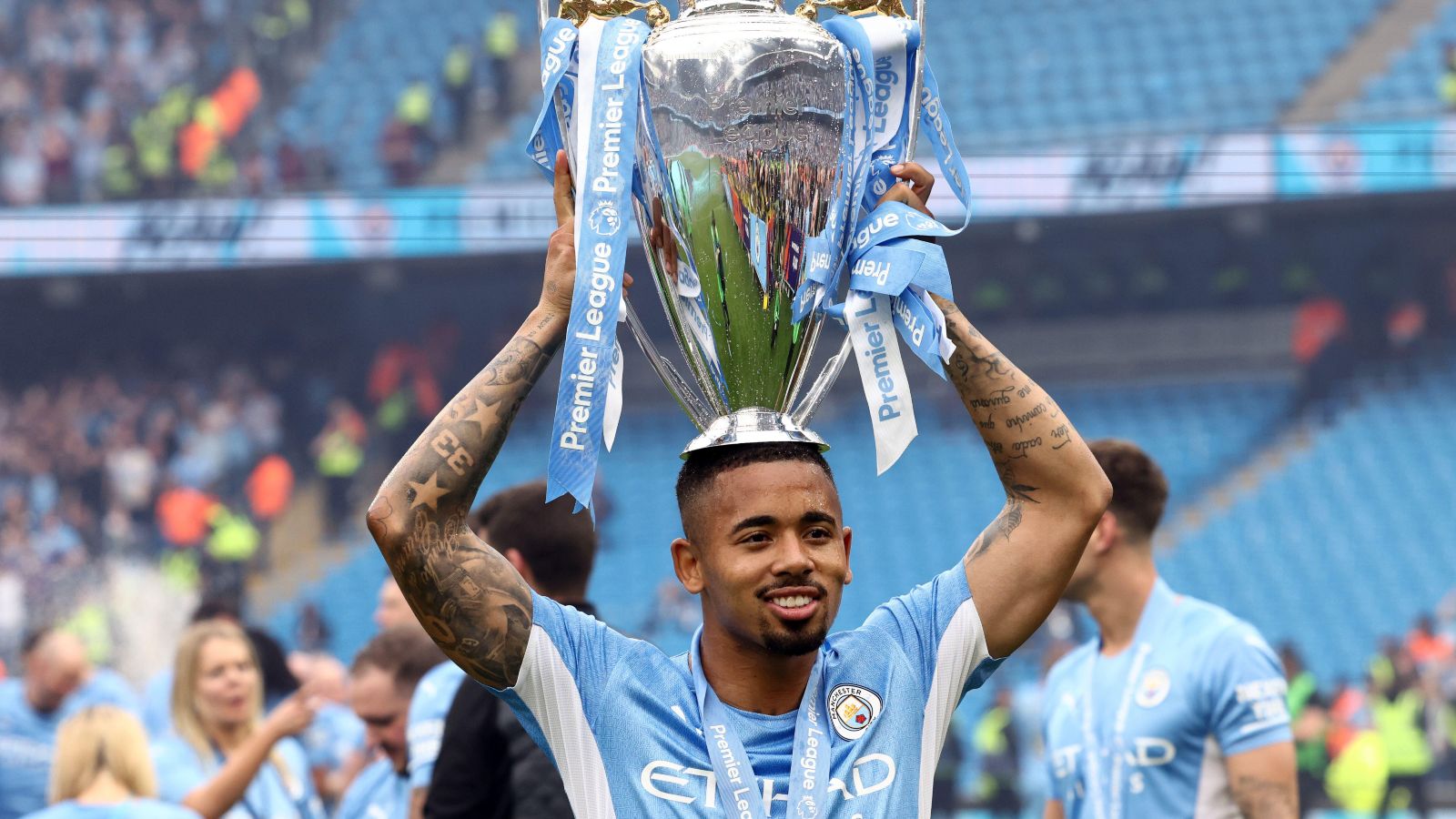 Manchester United – Edinson Cavani
Technically, Cavani will be a free agent and not a Manchester United player, however, he is still under contract at the time of writing so it works. The United squad is full of underwhelming players, so a move to another team challenging at the top of the table is unlikely for basically all of them. Having said that, Cavani would be a handy back-up striker for anyone in the league, although it is unlikely that he will agree to play second fiddle again next term.

Newcastle – Martin Dubravka
Speaking of back-ups and an overall underwhelming squad barring one or two players who are unlikely to leave, Dubravka would arguably be the best No. 2 in the league, and given the Magpies’ apparent desire to sign a new goalkeeper, it would be a great deal to pursue.

Nottingham Forest – Brennan Johnson
Forest are unlikely to sell, but Johnson comes up to the Premier League as one of the most promising youngsters in the division. He can definitely cut the mustard.

Southampton – James Ward-Prowse
The Saints skipper has been tremendous for his side and (apologies for going a bit Sir Alex Ferguson on Charlie Adam here) his set-pieces are probably worth £20m alone. His calming presence in midfield would be a welcome addition for any of the teams in question; even City, who could potentially line up a move if they fail to sign Phillips from Leeds.

Tottenham – Heung-min Son
Son is brilliant yet nobody has ever really tried to sign him from Spurs. It’s hard to work out why. He seems very happy in north London, but you never know. This is a transfer saga I’d certainly like to see.

West Ham – Jarrod Bowen
With Mane leaving Liverpool, rumours linking Bowen with a move to Anfield could reignite pretty quickly. Chelsea, Arsenal and United are all said to be interested and it is clear to see why. He had an excellent 21/22 and despite how good West Ham have been under David Moyes (this time around), he is ready to step up. It just depends on if someone will bite the bullet. That bloody English tax is very off-putting.

Wolves – Rayan Ait-Nouri
We love a bit of Rayan Ait-Nouri propaganda on F365, so any excuse really. He is pleasing on the eye, good going forward and solid defensively. Under the right manager, he could potentially be the best left-back in the Premier League. Make it happen, Pep.