Scottish Premiership clubs have been releasing their latest strips for the new season, which is your favourite?

Many have gone back in time for a retro feel for the 2022/23 season while others have stuck to tradition.

This season’s home strip is inspired by the ones worn 40 years ago when the Dons won the European Cup Winners’ Cup.

The home kit features the white pinstripe design, synonymous with the victory in Gothenburg on May 11 1983.

Over the season there will also be a series of events recognising the Gothenburg Greats.

Aberdeen’s away kit also mirrors season 1982/83 with some modern touches.

The strip carries a special commemorative badge to mark the anniversary, along with two stars on the sleeve, representing Aberdeen’s two European trophies.

It is traditional with a twist for the Hoops as the new home strip combines the iconic green and white hoops with silver-metallic Adidas 3 Stripes on the shoulders.

The star above the club badge is also silver, while there is a subtle pattern within the green hoops.

Celtic’s away jersey appears to draw inspiration from the 1992-93 classic.

It is predominantly black with green stripes that each have a thin white border while the club badge is surrounded by a shield.

This season’s third kit draws inspiration from the home of the champions with the sleeve cuff showcasing the iconic geometric outline of Celtic Park in the Glasgow landscape.

The kit is in clear onix with pulse yellow and black features and also features a yellow star – marking the 1967 European Cup win – above the Celtic crest which sits proudly on the chest.

This new-look hit embodies the memories of United’s historic Scottish Premier Division win during the 1982/83 season.

Most notably, the crest is new and woven into the top left of the shirt which celebrates the success of 40 years ago.

On the back is a bespoke message in memory of the aforementioned Premier Division title while there is a design sublimated into the lower back of the kit – bringing a modern twist to an already classic shirt.

In keeping with United’s brand regeneration, the away shirt features a diamond pattern as a base layer – adding depth and shine to a black colour-way.

The silver decals and neck trim embody the club’s success of the 1983 season upon which the home shirt is based.

The Tynecastle club have returned to a more traditional home strip, reminiscent of the one worn when they last lifted the Scottish Cup in 2012.

Hearts are also continuing their partnership with MND Scotland, with the charities logo on the front of the strip.

The partnership was formed after former captain Marius Zaliukas died from the disease in 2020.

Hearts have swapped blue for white for this season’s away kit that features square polka dots on a clean, white backdrop.

There is a stylized crew neckline and in keeping with the club’s iconic colours, maroon cuffs feature too.

The third kit is inspired by Hearts’ Tynecastle Park stadium, with the tonal stadium graphic running through the black stripes.

It is in the Leith side’s traditional green and white colours but it contains some new design features.

Easter Road is on the front of the kit, with the West Stand prominent on the green background.

The strip is made with 100 per cent recycled polyester material as part of Hibs’ ‘Greenest Club in Scotland’ campaign.

Hibernian’s ‘Cabbage Kit’ is born off the concept of ‘Cabbage and Ribs’ – the old rhyming slang for Hibs.

The away strip features a new design; the cabbage pantone forms the base colour of the kit which is finished off with a stylish black ribbing around the collar and the cuffs.

In keeping with the design of the home shirt and there is a subtle white outline of the stadium roof sublimated into the background of the jersey.

Kilmarnock will be in their traditional colours as they return to the Scottish Premiership.

After plenty of demand from fans, the yellow away kit is back too.

It features a combination of ‘Killie yellow and Canary yellow’, alongside blue chevrons on the shoulders.

It is back to Livingston’s traditional yellow for the season ahead after an all-black home kit for the last campaign.

With a v-neck collar, the strip features narrow vertical black and white stripes while the socks are trimmed with black.

The away strip is predominantly white and features a black band running through the middle with amber detailing within.

White shorts with black piping and white socks, with a black cuff, compliment the top.

The traditional colours of claret and amber are combined to create a wide amber stripe through the middle of the shirt while the back of the shirt comes in solid claret.

Small claret and amber lines go around the neckline and that claret theme continues on the cuffs with the club’s nickname ‘Steelmen’ embedded on the back of the neck, like the home top.

It is a retro look for the Ibrox side for the 2022/23 season with the new home strip including a checkerboard print on the front with a thin red stripe on each side of the shirt.

After last season’s anniversary badge, Rangers are back to using the standard white lettering.

The retro theme continues with the away kit as a diagonal red and white print features across the top – similar to the one worn during the 2006/07 season.

Rangers’ crest is embroidered in blue with the slogan ‘Better Never Stops’ featuring inside on the bottom of the jersey.

Like the home and away tops, there’s a nod to the past with the third kit as orange takes centre stage alongside some navy and white.

It was the 2002/03 treble-winning campaign when Rangers famously had an orange away kit and fans will hope similar success follows this campaign.

Retaining their traditional blue and red colours, the new kit features more of the latter as the vertical pinstripes of last season are replaced with a horizontal pattern.

The modern and smart design is complemented with blue panelling down the side and a red collar.

Having worn all-yellow last season – it’s a new look away strip for the Staggies.

White dominates with a subtle sublimated print featuring on the torso, while white shorts and socks round off the look of the new Ross County away kit.

After keeping their top-flight spot by beating Inverness in a play-off, St Johnstone are back in Scottish Premiership action wearing their traditional blue home kit.

The yellow flashes on the shoulders have been removed with a subtle diagonal pattern running across the jersey which features micro mesh on the back for increased breathability.

A far cry from the red and white of last season, the new away strip sees purple combine with an intricate green graphic pattern down the middle.

The unique design – using similar colours to the kit of 1996-98 – has seen the initial batch almost instantly sell out.

Members of the independent supporters club, SMiSA, chose the home strip which has the Paisley pattern incorporated into it.

The design is used around the world and the club say they are proud the first team, women’s team and academies will wear it on the pitch while the fans wear it in the stands.

Like the home kit, the away kit also features the Paisley pattern and will be worn by every St Mirren squad this season.

A black base with that grey pattern gives the strip a different look to last season’s all-red and was launched by St Mirren supporter and DJ Ewan McVicar. 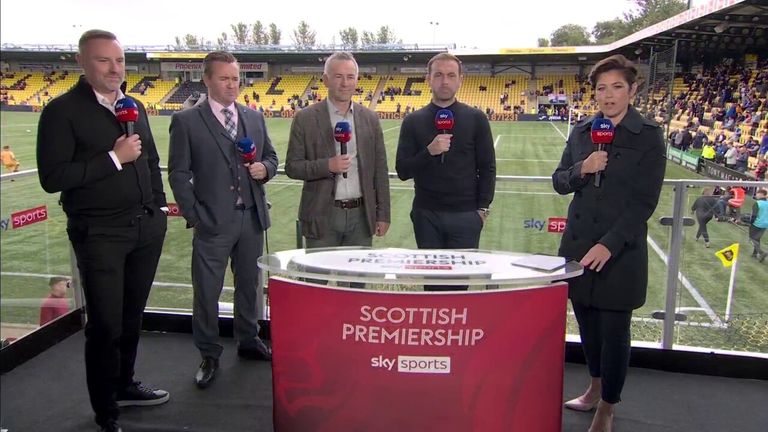