STOCKPORT’S long-awaited return to the Football League is being celebrated by a curry menu being named after club legends past and present.

County take on Barrow at Edgeley Park on Saturday for their first game in the EFL for ELEVEN YEARS.

And fans, players and staff have been marking the occasion by tucking into some specially-prepared spicy dishes at the nearby Garam Massala restaurant, owned by Hatters fan and sponsor Muhammad Mohi Uddin Saleem.

If you love very hot curry, The Flynny Phal, in honour of legendary Stockport captain Mike Flynn, will set your tongue on fire.

The former defender was a fiery character and the dish is hotter than a vindaloo. The restaurant warns diners to ‘pick their meat or vegetables and brace themselves.’

Or if you are not quite as brave but still love a bit of spice, the Big Kev Karachi Gosht — celebrating 1990s striker Kevin Francis — sounds like a good choice. 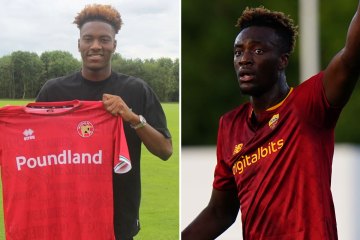 But the curry everyone in the Stockport dressing room are raving about is The Sarcevic Silsila, named after midfielder Antoni Sarcevic.

It is described as ‘a classy chicken dish that uses peppers, onions, tomatoes and fresh herbs along with a dash of brandy to produce a consistent performer on any Indian menu, an ideal tribute to Antoni.’

And the 30-year-old midfield ace loves it.

He told SunSport: “I’d never heard of a curry called Silsila before. It is nicely marinated and has loads of onions with it. It was so nice, nothing too hot but a lovely taste.

“I had it with pilau rice and a huge naan bread. The restaurant served up some poppadoms but I saved myself for the curry!”

Although Sarcevic’s personal favourite is the Big Kev Karahi Gosht, he laughed: “I don’t mind a hot curry so would sway towards a spicier one.

“I dipped into the Big Kev one and loved it. That would be the one I’d order. But all the lads favoured mine!”

Saleem, 49, has supported the club for 28 years and his family have owned the restaurant throughout that time.

He said: “We’ve always had a lot of County fans dining with us — as well as players and staff with their families.

“Me and my family go to their games every week and it was incredible last season to win the National League and finally get back into the EFL.

“We just wanted to honour our County heroes for doing the town proud and thought it would be a nice surprise for the team.

“We also sponsor the club and thought it would be good to invite the players down to try the dishes out — and they loved it. Big Kevin Francis also came to try out his dish too!”

Other spicy delights include The Super Al Akbari Cham Cham – in homage to legend Alun Armstrong — along with The Ash Achanak (for Ash Palmer) and The Ben Bazaar Platter (for Ben Hinchcliffe).

While owner Matt Stott (The Stott Smoked Sizzler) and boss Dave Challinor (The Chally Chicken Modhu) also have curries named after them.

But it is The Paddy Podina that is going down a storm with regulars.

But forward Connor Jennings admits all the dishes are too spicy for him — including his own one, The Jennings Jalfrezi.

He laughed: “I’m more of a korma man I’m afraid but it’s great to see this sort of thing happening in our community.

“Everyone is so excited. I was in a local Nando’s the other night and there were loads of fans in County shirts absolutely buzzing about the new season.”

Owner Stott has galvanised the club since he took over in January 2020 — wiping out their debts and investing in improving the stadium and team. He has big plans to get the club into the Championship.

But probably his biggest masterstroke was recruiting manager David Challinor in November from Hartlepool — just months after he had taken them back into the EFL.

And Sarcevic said: “When the gaffer took over, he told us although it was a step down for him back to the National League, he didn’t see it that way because of what the club wanted to achieve in the next few years. Luckily he took us up right away.”

Sarcevic knows a thing or two about League Two, having won promotion twice with Plymouth as well as with Fleetwood and Bolton.

And he added: “We’re confident of going for promotion again. The National League was so hard to get out of because there’s only one automatic promotion spot — whereas in League Two you have three going straight up and another in the play-offs.

“We have the momentum so why not?”