In that series, we analyse the problem areas within teams, and suggest solutions in the form of incoming players. It’s a fantasy, but a fun one.

The most important thing, really, is that the optimism of last season is not damaged by a summer of inertia. And Patrick Vieira is not given reason to believe he cannot build on last season.

A good way to do that would be to address the most obvious area of need: a replacement for Conor Gallagher, who has returned to Chelsea.

Beyond his more eye-catching moments last season, Gallagher brought tremendous energy to the outside of Vieira’s midfield three. He was an excellent passing target, a tireless presser, a source of goals and a one-on-one threat with the ball. That is an awful lot to replace.

In addition, he played on Palace’s more conservative flank, with Joel Ward nowhere near as aggressive a full-back as Tyrick Mitchell. As a result, the combination between Gallagher and Ayew will have to be replicated, too, if Palace are to keep their thrust down the right. 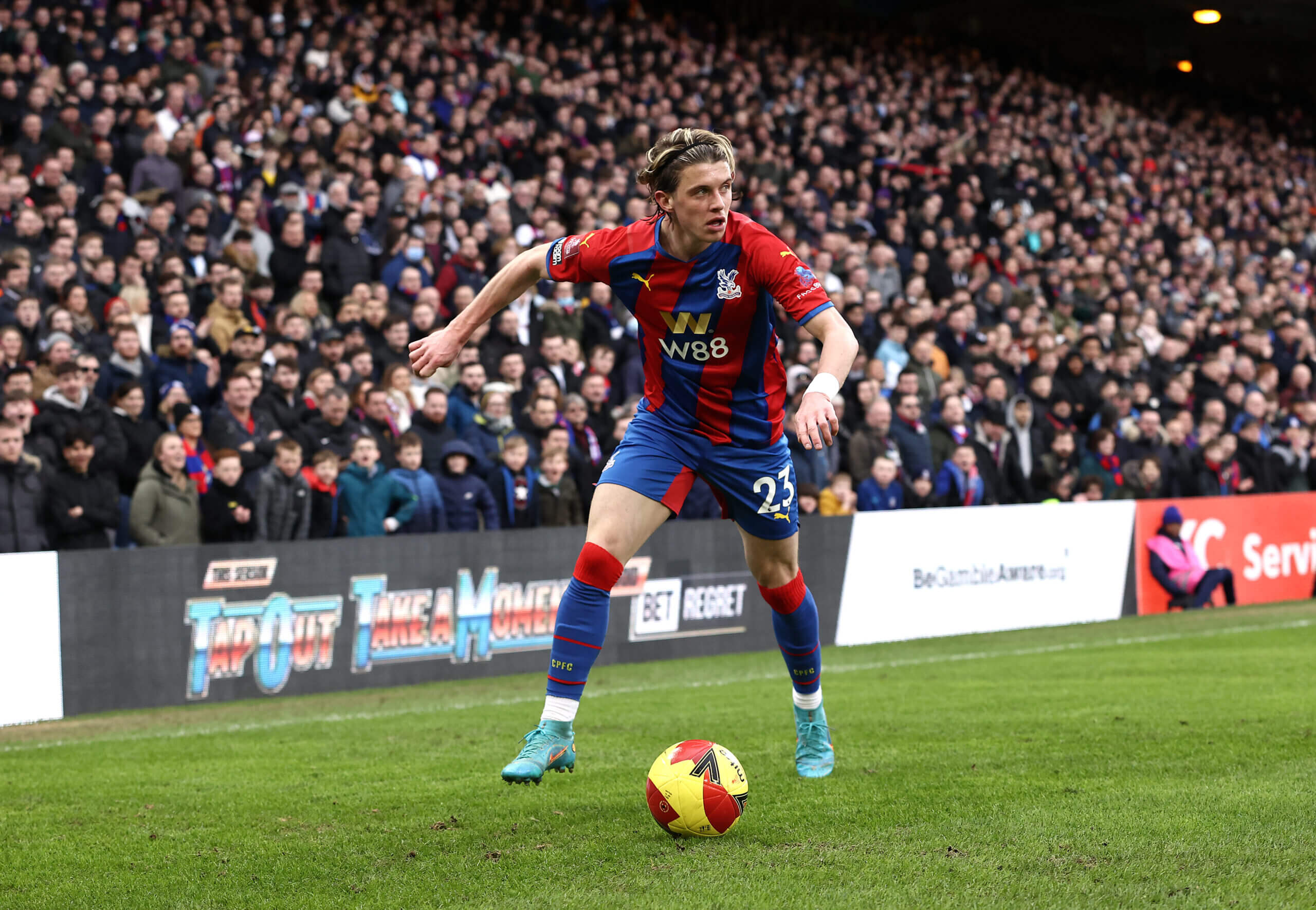 Gallagher will be difficult to replace in the Palace midfield (Photo: Ryan Pierse/Getty Images)

Lens’ Cheick Doucoure has been the name most often mentioned and he would be a fine signing. He shares many of Gallagher’s qualities and is a great passer. Palace are increasingly confident that they can secure a deal for Doucoure, who will not be short of options this summer.

If that move does not pan out, however, we like Rangers’ Joe Aribo, whose contract is due to expire in 2023 and whom Palace have been linked with in the past.

Aribo’s career has accelerated dramatically since leaving Charlton back in 2019. He has become a Nigeria international and would fit Palace’s midfield perfectly. He is used in several ways by Rangers – as a winger, as an attacking midfielder – but he is most effective in the wide central midfield position and it is from there he possesses many of the same traits as Gallagher.

Using smarterscout data, which gives players a rating from 0-99, relating to either how often they do a given action compared with others playing in their position (such as the ball recoveries and interceptions), or how effective they are (such as how well they progress the ball upfield), we can look at Aribo’s quality in each metric.

The pizza chart below gives us insight into Aribo’s strengths and weaknesses as a central midfielder. There is plenty to like. Compared to others in his position, he carries the ball a lot (carry and dribble volume, 87 out of 99) and plays short, simple passes (link-up play volume, 89 out of 99). His low score for progressive passing (10 out of 99) shows how much he prefers dribbling the ball forward to threading passes.

Although he is not quite as active defensively as his peers (32 out of 99 for ball recoveries and interceptions, 42 out of 99 for disrupting moves), he is successful when he does get involved (defending intensity, 68 out of 99, and defending impact, 71 out of 99) and he is not afraid of an aerial duel either. 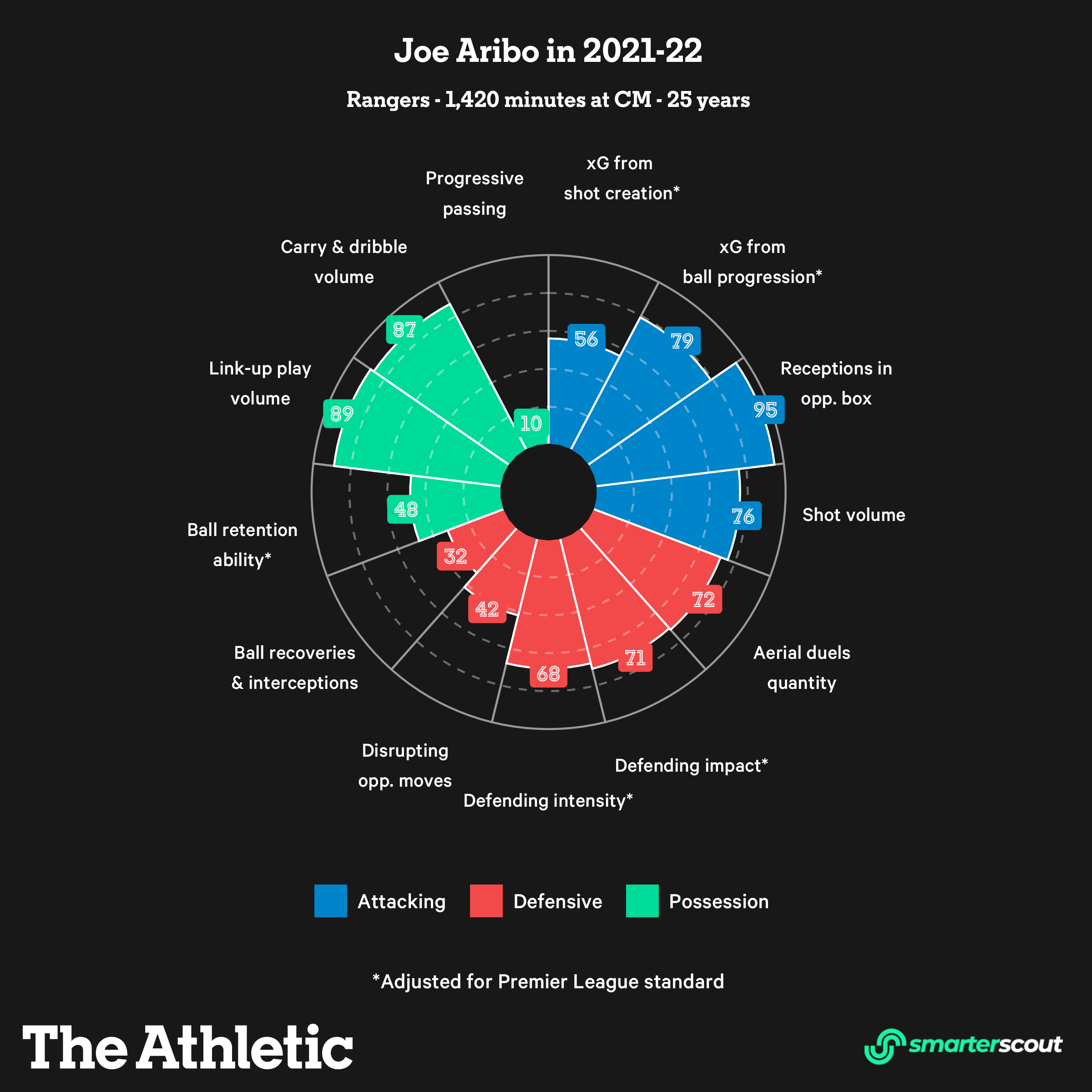 Aribo has a very strong presence in attacking areas too — rating very highly for receptions in the opposition box (95 out of 99) — so he clearly times his runs well, and he is way above average for shot volume and xG from ball progression.

He was also born in Camberwell and it is difficult not to like the idea of adding another London-born player to this Palace starting line-up. Michael Olise was raised in Hammersmith, Ebe Eze grew up in Greenwich and Tyrick Mitchell comes from Brent; Palace’s London identity has been restored in recent years.

None of that would matter if Aribo was not also a very good player and he showed during Rangers’ run to the Europa League final that he is more than capable of being effective against some of the best players in Europe.