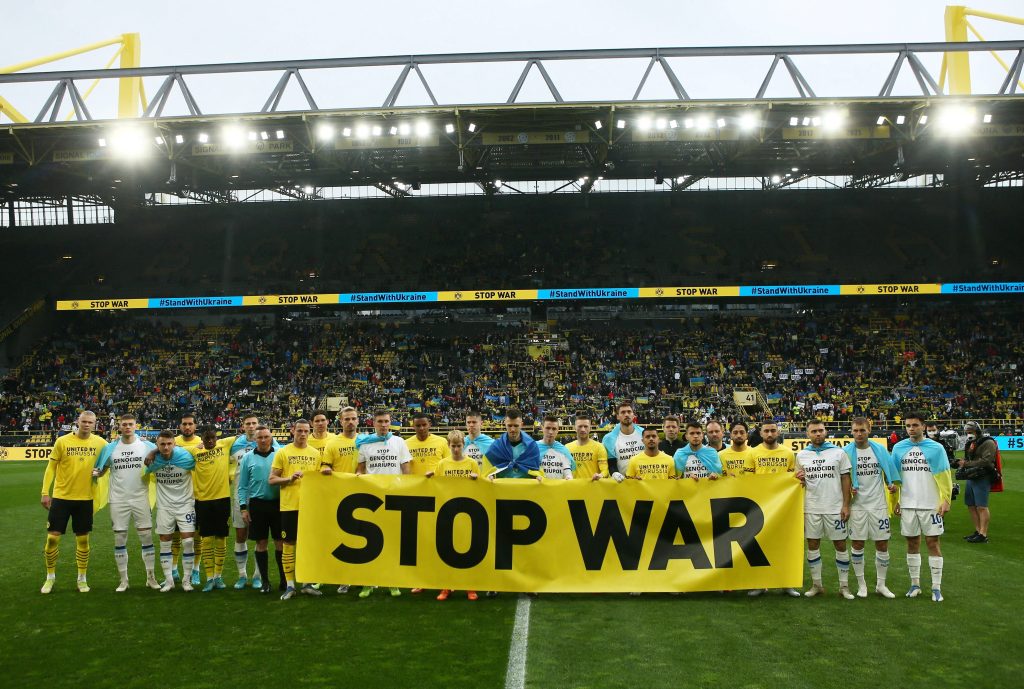 Members of Ukraine’s national football team squad are currently gathering in Glasgow ahead of next week’s play-off again Scotland to determine who will qualify for the 2022 World Cup Finals in Qatar later this year.

With Russia’s invasion of Ukraine now it is fourth month, the stakes for the Ukrainian team could hardly be higher. As well booking place at the World Cup for only the second time in Ukraine’s history, they are also seeking to give their compatriots back home something to cheer.

Ukraine-based members of the country’s national football team needed special permission to play in the coming Scotland tie. Since the Russian invasion began on February 24, most Ukrainian males aged 18 to 60 have been banned from leaving the country due to the imposition of martial law.

The war has brought ordinary life in Ukraine to a standstill, with all public sports events cancelled. Soon after the invasion began, Ukrainian football officials suspended the country’s Premier League and other championships. On April 27, they confirmed that the 2021-22 season would not be completed due to the wartime conditions in the country. This has left many clubs facing an uncertain future and possible bankruptcy.

The war has also created obstacles for Ukrainian participation in international football competitions. European football’s governing body UEFA announced in February that Ukrainian clubs would have to play home matches at neutral venues outside Ukraine.

The national team’s forthcoming game in Scotland was originally scheduled for March but was postponed until June 1 due to the extreme circumstances in Ukraine. The game is expected to provide watching Ukrainians with a welcome distraction from the devastating conflict raging in their country and the horrors of Russian occupation.

If Ukraine secures victory in Scotland, the team will progress to the play-off final against Wales. With international audiences inspired by Ukraine’s courageous resistance against the might of the invading Russian military, the country’s national team can expect to receive plenty of backing from neutral football fans around the world as well as millions of supporters in Ukraine. “I feel a great responsibility for our fans at home, for our armed forces, for the ordinary people who are at home in Ukraine right now,” commented national team coach Oleksandr Petrakov in a recent interview. “It’s a big responsibility for me and for the boys.”

As the Russia crisis in Eastern Europe heats up, UkraineAlert DAILY delivers the best Atlantic Council expert insight, from the UkraineAlert online publication and beyond, to your inbox Monday through Friday.

With no domestic league to compete in, Ukraine’s two biggest football teams Dynamo Kyiv and Shakhtar Donetsk have recently participated in charity games to help raise awareness about the war in Ukraine. Both teams have travelled Europe for exhibition matches while donating any money raised to Ukrainians in need.

Individual Ukrainian footballers have also contributed to aid efforts. National team captain Andriy Yarmolenko, who plays his club football for West Ham United in the English Premier League, donated GBP 75,000 to the Ukrainian army. He also contributed to the United Ukraine Foundation, where his funds were used to purchase an ambulance and humanitarian aid for Ukraine.

Meanwhile, Manchester City’s Ukrainian star Oleksandr Zinchenko has attended several anti-war protests in Manchester and dedicated his team’s recent Premier League title triumph to Ukraine. “I would love to one day bring this trophy to Ukraine because they deserve it,” he said during an emotional TV interview. Zinchenko has also been one of a number of Ukrainian footballers to criticize Russian players for failing to speak out against Putin’s criminal invasion.

Other Ukrainian sports stars have similarly backed the country’s war effort. Tennis player Elina Svitolina vowed to give her prize money from the Monterrey Open to the Ukrainian army, while fellow tennis star Dayana Yastremska also donated her winnings from the Lyon Open to help Ukraine.

The most high-profile Ukrainian sporting event of the coming months is likely to be heavyweight world champion Oleksandr Usyk’s rematch against British challenger and former champion Anthony Joshua. The two were scheduled to meet in July but delays in negotiations mean the bout could now be delayed until September.

When war broke out in February, Usyk initially signed up to join the defense of Kyiv. However, the heavyweight champ says he was persuaded by friends and officials that he could help the country “way more” by returning to the ring and defending his title.

Usyk was one of many Ukrainian sporting figures to take up arms in response to the Russian invasion. A number of athletes have already lost their lives defending Ukraine. Former Ukrainian footballers Vitalii Sapylo and Dmytro Martynenko and former biathlete Yevhen Malyshev were among those killed in the early weeks of the war.

With no end in sight to the Russo-Ukrainian War, the list of sporting casualties will inevitably grow longer. While thousands of Ukrainian sportsmen and women continue to serve in the country’s armed forces, others will attempt to raise the nation’s spirits with victories on the international stage.

Mark Temnycky is a nonresident fellow at the Atlantic Council’s Eurasia Center and a freelance journalist covering Eastern Europe.

The views expressed in UkraineAlert are solely those of the authors and do not necessarily reflect the views of the Atlantic Council, its staff, or its supporters.

The Eurasia Center’s mission is to enhance transatlantic cooperation in promoting stability, democratic values and prosperity in Eurasia, from Eastern Europe and Turkey in the West to the Caucasus, Russia and Central Asia in the East.

Follow us on social media
and support our work