It’s a mantra hammered home in Bomberland every day of every week: don’t get caught up in what’s in the rearview mirror or look too far into what might be appearing in the horizon.

And so this commandment, chiseled into stone by head coach Mike O’Shea from the day he first took over as head coach, calls for the Winnipeg Blue Bombers to simply live in the moment. That was a notion certainly reinforced late Friday night by dominant defensive end Willie Jefferson not long after the Blue Bombers cranked out another victory with a 26-12 decision over the Hamilton Tiger-Cats at IG Field.

“Good night at the office,” Jefferson said. “Offence, defence, special teams came out and did what we needed to do to get the win. (We’re) 1-0 this week.”

All of this, of course, is absolutely, positively true.

Yet, while the blueprint clearly works for the two-time defending Grey Cup champs, it’s not something those of us on the outside need to heed so religiously. To that end, let’s pull back a bit here and take a wide-angle look at the current run the Blue Bombers are in right now because they are historic and need to be stared at in wonderment to fully appreciate the accomplishments.

Some numbers to really bite into here:

That remarkable stretch is rivalled only by a 27-1 streak from 1983-86 when the Blue Bombers made old Winnipeg Stadium the nastiest stop in the entire Canadian Football League. Worth noting here: the Blue Bombers have the best home record in the CFL since 2017, at 29-7, or an 80.6 winning percentage. 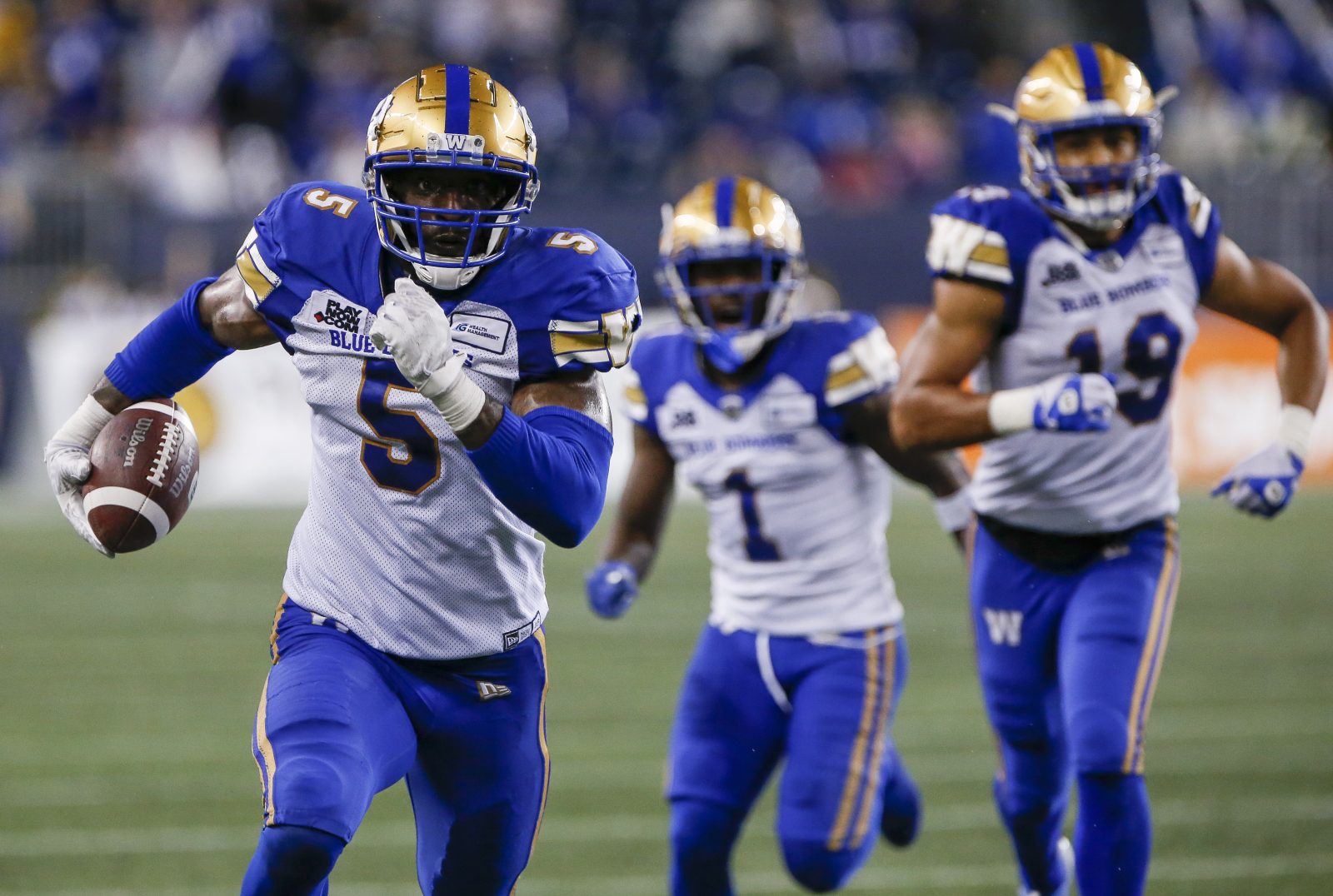 There are some numbers inside those results that make this run even more masterful. Consider this: of the 21 victories, 14 have been by double-digits including two shutouts – so rare in the CFL – with an average margin of victory a whopping 15. 7 points.

IG Field was gobbling up every second of it Friday, on a night when kickoff was delayed 45 minutes due to lightning in the area, but the announced crowd of 23,600 still had the joint rocking.

“We’ve got the best fans in the league,” said running back Brady Oliveira. “You look at it with that weather delay… the stadium wasn’t filled like usual, but it was loud. It was loud like it was a sold-out game. 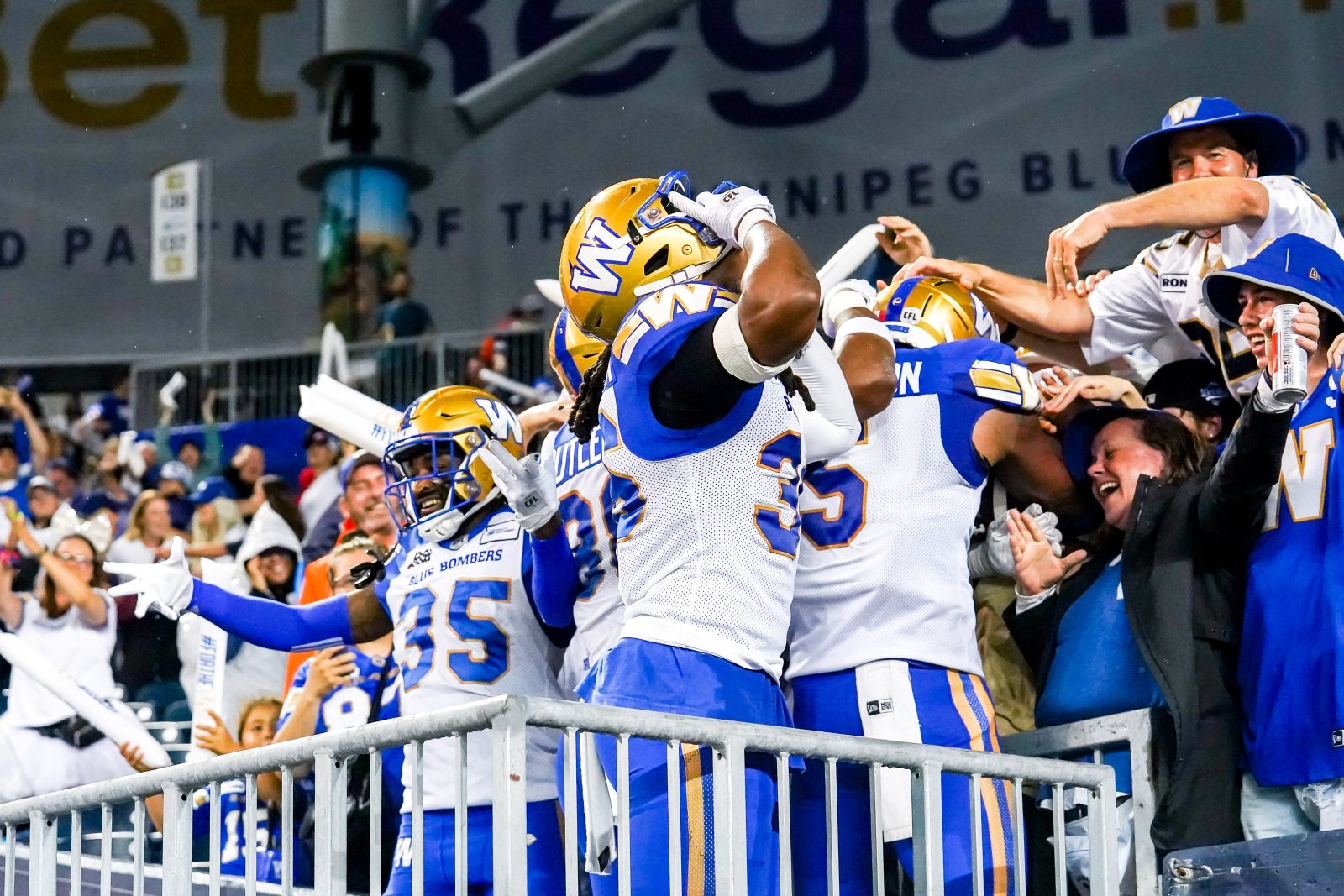 LET’S GUSH SOME MORE ABOUT THE BLUE BOMBERS DEFENCE… because the unit is certainly deserving.

Winnipeg’s defence limited Hamilton to just four field goals in Friday’s win, with the Ticats not getting inside the Blue Bombers’ 20-yard line. As a result, the defence has surrendered just 41 points and one touchdown in three games. That score came in the first quarter of the opener – a Jermiah Masoli-to-Shaq Johnson 20-yard TD strike for Ottawa – meaning the defence has not given up a major for 169 minutes and 37 seconds.

Winnipeg limited Hamilton to just 258 net yards of offence, including just 32 along the ground

“They did a nice job. They were physical and we did well at the line of scrimmage,” said head coach Mike O’Shea. “Hamilton, they’ve had to juggle quite a bit on the O-line (guard Brandon Revenberg missed the game due to injury and tackle Chris Van Zeyl was out for stretches Friday night) and I think we were able to take advantage of that a little bit.”

FURTHER TO O’SHEA’S POINT… the Blue Bombers had just the lone sack of Ticats QB Dane Evans – Jefferson’s first of the year – but Winnipeg’s front was dominant as Jackson Jeffcoat had two tackles, a tackle for a loss and a knockdown, while Kyrie Wilson and Donald Rutledge, Jr. also swatted passes out of the sky.

Jefferson’s sack and his fantastic Pick-6 came on successive possessions in the fourth quarter. Asked if he needed a game like that personally, Jefferson shrugged and added:

“Like I said, it’s just another night at the office. I come into every game, every week just wanting to be dominant. I know teams game plan against me, game plan against our defence and if I’m able to make something happen, good for me, and if not I just want to disrupt the offence for my team. As long as we, as a defence, can play together and make some stops and get off the field on second down and get our offence the ball to do what they do… it’s good.

“I do like the accolades. I do like the stats and things like that, but at the end of the day, I could care less. As long as we win and I do what I need to do for us to get the ‘W’, for us to make some plays on defence, then job well done on my end.”

Jefferson now has five career defensive touchdowns including a 97-yard interception return for a TD against the Blue Bombers in the 2018 Banjo Bowl when he was a member of the Saskatchewan Roughriders.

“It’s always fun. It’s like a bonus,” said Bombers QB Zach Collaros of seeing Jefferson’s Pick-6 against the Ticats. “I don’t want to bring up bad times for Bombers fans, but I remember that one (Banjo Bowl) when he was running around the goal line and I was, ‘What are you doing?!’ He was, ‘I’m trying to run out the clock’ and I said, ‘It’s the second quarter!’ It was like Madden Football.” 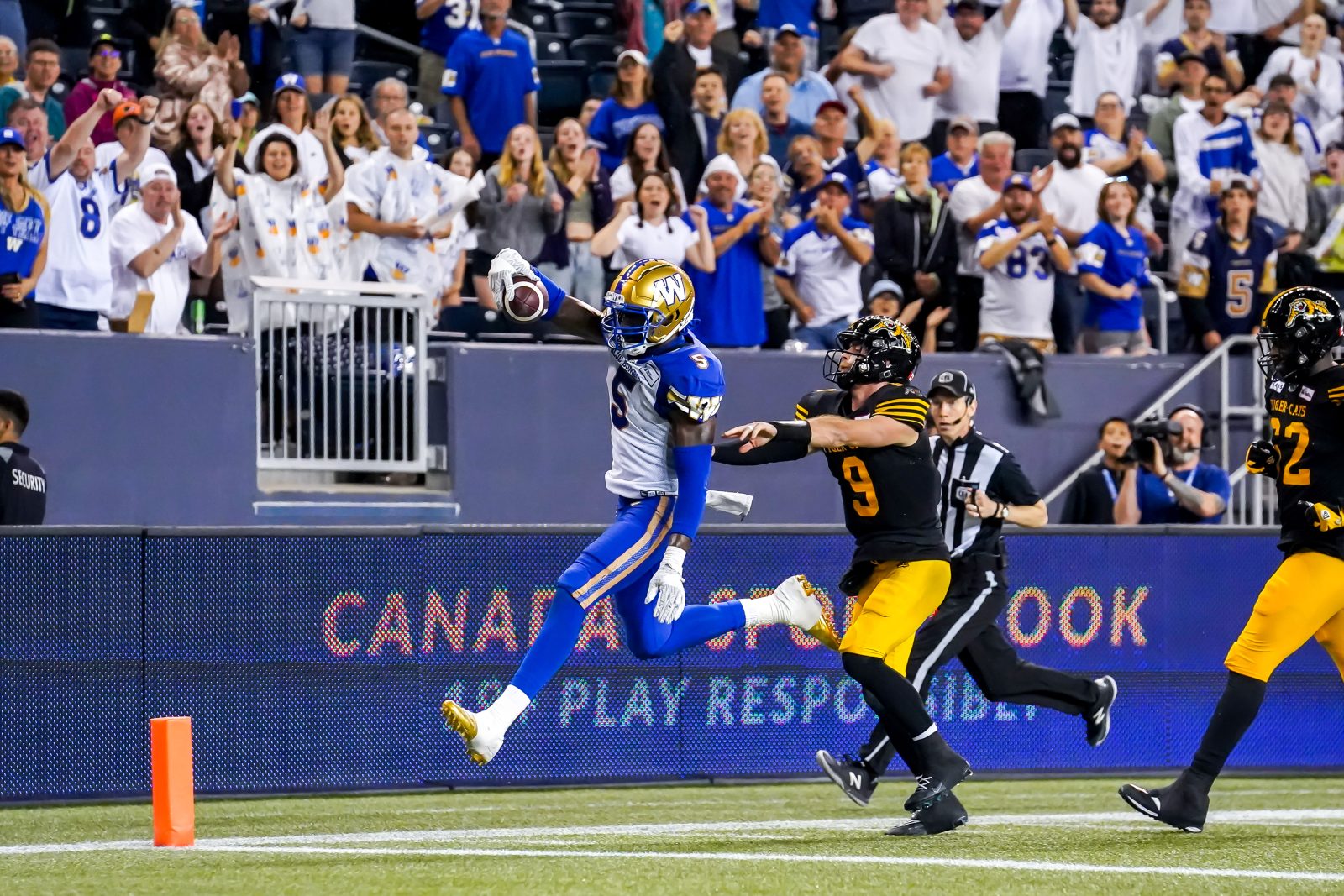 THE BLUE BOMBERS OFFENCE, MEANWHILE… started things out with a bang against the Ticats, as Collaros connected with Greg Ellingson for a 46-yard pass on their first offensive play of the game.

“It was a great call from Buck (Pierce, Offensive Coordinator) trusting us to execute the play. Greg made a great catch. It was something we’d seen on film – we do run the ball well and the Ticats added into the box and do a great job of filling the gaps. We thought we could take advantage of them on that play and Greg made a heckuva catch and Rasheed (Bailey) did a great job, too, getting across and pulling the safety with him.”

Winnipeg had field goals on its first two drives and held nearly a 13-minute advantage in time of possession but is still after more consistency.

“We started fast, and that was the message throughout the week in the locker room – start fast, be physical, play a full 60 minutes of football, fire on all cylinders,” said Oliveira.

“You’re starting to see us working and getting into a groove. We’re definitely pushing in the right direction. We’re still not playing our best football, which is exciting, but in the last three weeks we’ve been playing against some good football teams. Ottawa and Hamilton are good football teams and the fact we were able to come out on top and be 3-0 has us sitting in a good spot.

“But we’ll keep on working and keep on building every single week.”

Oliveira had 56 yards rushing on 15 carries and also scored his first TD after a sensational catch by Nic Demski.

“It’s great. First touchdown of the season,” said Oliveira. “Hopefully I can get into the end zone a couple more times this year. That touchdown is Demmer’s touchdown. No. 10… that was his touchdown, absolutely. He got us down there and then you saw me walk it in. That O-line moved guys pretty much all night and especially on my touchdown run. Shoutout to Nic Demski, obviously, and for the O-line for allowing me to get into the end zone.” 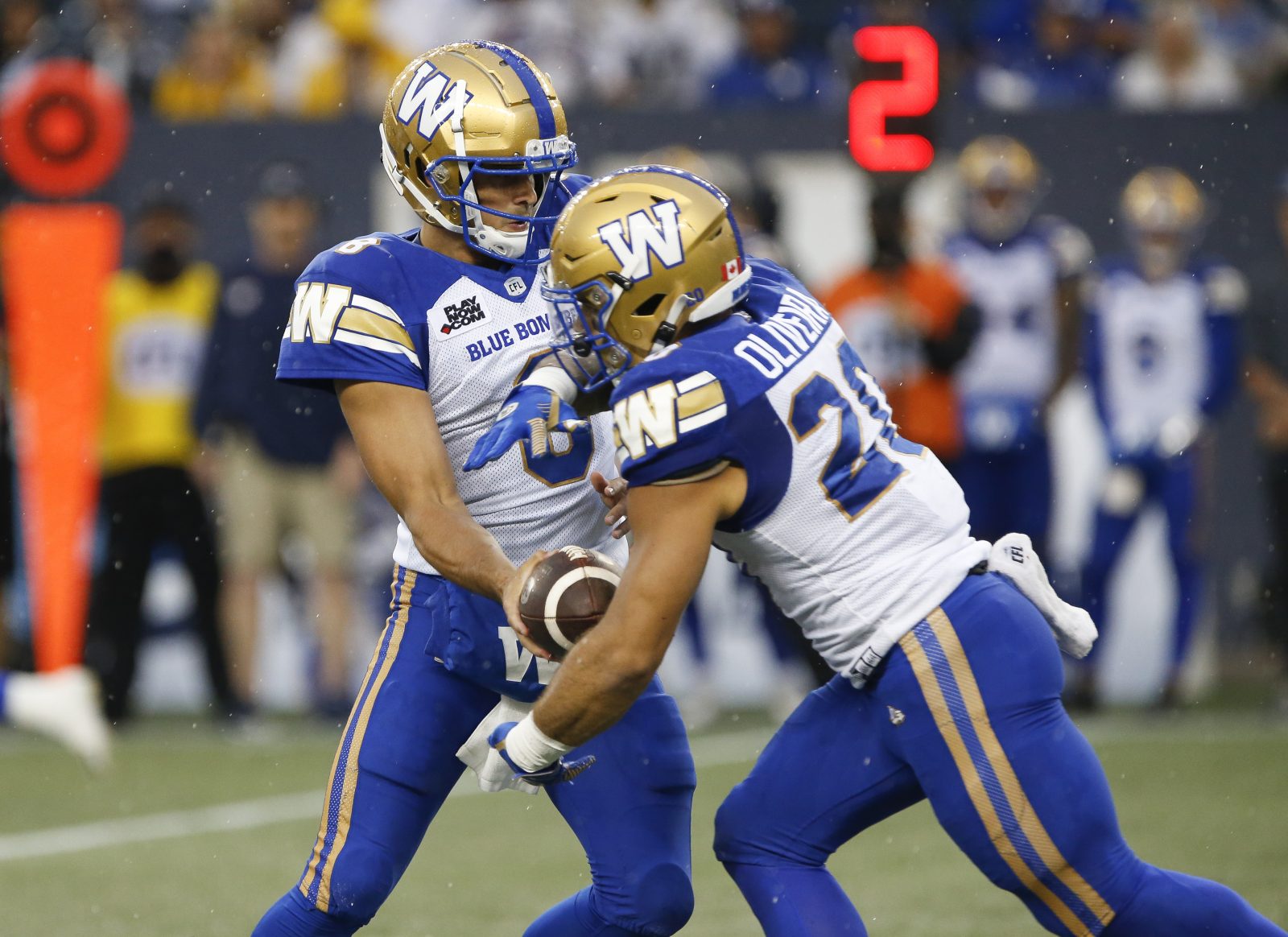 Unfortunately, Demski did not finish the game after being injured after a catch early in the third quarter. He left the game under his own power with an apparent ankle injury, and we likely won’t get an update on his status until the team returns to practice on Wednesday. Demski was having his best game of the season with six catches for 96 yards.

Brendan O’Leary-Orange replaced Demski and had three catches on four targets for 22 yards, including a second-down conversion.

“When you have a guy like Demski, that guy can do it all,” Oliveira said of his fellow Oak Park High School alum. “Obviously you’ve seen him catch the ball and the yards he gets after the catch. He can come in and pass protect, he can run the football. I mean, that’s the guy you want on your football team and I’m super glad we have him on our team. Obviously when someone goes down it’s the next-man-up mentality.”

ONE MORE ON OLIVEIRA… on the ground game. The numbers are hardly overwhelming, but the club remains committed to pounding it consistently as part of its attack.

THE BLUE BOMBERS NOW ENTER A NASTY STRETCH IN THEIR SCHEDULE… with five of their next six on the road, beginning on July 4th in Toronto against Andrew Harris and the Argonauts, followed by a trip to Vancouver five days later for a game against the B.C. Lions on July 9th. Winnipeg returns home to face the Calgary Stampeders on July 15th, followed by road trips to Edmonton, Calgary and Montreal.

AND FINALLY… congratulations again to Dave Ritchie and Dick Thornton for their inductions into the Canadian Football Hall of Fame.