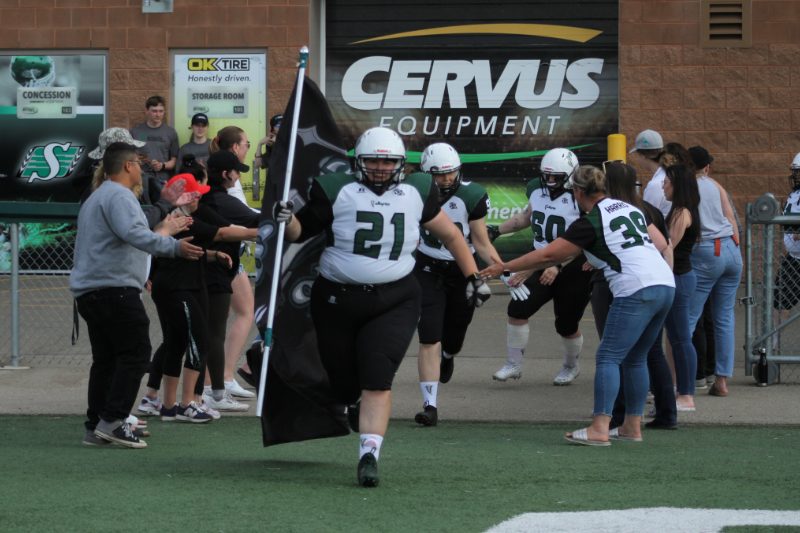 Led by flag-bearer Jamie Lammerding and with an honour guard of Valkyries alumni, the Saskatoon-based football makes its entrance to start its game against the Regina Riot on Saturday. (Becky Zimmer/paNOW)

A 46-7 victory against the Regina Riot was not all the Saskatoon Valkyries celebrated on Saturday night at SMF Field.

The six-time Western Women’s Canadian Football League (WWCFL) champions also celebrated their alumni, their 10th season as a tackle football club, and their founder and first head coach, Jeff Yausie, before and after the game.

There have been many ups and downs over the years for the club, but Yausie said seeing the number of young women who come out and try football for themselves, the first under-18 female national championship happening in July, and the number of Valkyries consistently making national teams — including the 12 who are going to Finland in July for the International Federation of American Football’s World Championship — are all signs that women’s football is thriving in the province right alongside other elite football teams.

“Players come and go, but the organizations — the Riot and the Valks — are here to stay and that’s very cool because it means there’ll be opportunities for other young women no matter who comes and goes,” Yausie said.

Building the team, and in turn the WWCFL, was truly a ground-up endeavour. Yausie, along with Valkyries general manager Michelle Duchene, saw the potential of a women’s football team in 2010 when they held their first football clinic with players from Saskatoon, Regina, and Prince Albert.

Yausie said he saw it as an opportunity to continue to grow football in the province.

“If you’re not looking at new ideas and growing and being open-minded, then you’re falling behind,” he said. “We hosted that camp and then all of a sudden, we had girls wanting to play football and try out and trying to figure out organizations and start from nothing.”

While Yausie stepped away as head coach of the team in 2017 to take on a role as linebackers and defensive co-ordinator for the PFC’s Saskatoon Hilltops, he left the team in good hands with current head coach Pat Berry taking the reins.

Berry credits Yausie with getting him involved in the team in 2014. With his vast coaching experience, Berry said it is a different experience coaching women. They actually listen, he said with a laugh.

“They’re elite athletes who care a lot about their sport … The space, when it comes to tackle football in Canada, we fill a pretty large part of it,” Berry said. “I’ve mentioned a few times to our team (that) we get a lot of eyes on us because they do a lot of things right, our athletes. I’m very proud of them.”

While this is her last season wearing the Valkyries jersey, football was and will continue to be a large part of Jamie Lammerding’s life.

Being there from the beginning, along with linebacker Beth Lalonde, Lammerding said the team has come a long way because there were women who were willing and wanting to step up and try something new while not having a lot of football knowledge.

With the expansion of girls high school flag football and the creation of the Prairie Girls Football league, young girls are aspiring to join the Valkyries and Riot.

“When we started there was no one to kind of aspire to; we were just kind of creating our own paths,” Lammerding said. “It’s great that we’ve been able to create that opportunity for other girls and that just helps us grow.”

Going out in her 10th season, Lammerding said she feels lucky she’s able to go out on her own terms, as many elite athletes do not get that opportunity due to injury.