In The Auctioneers on North Court, it is hot enough to melt sweat. A Union flag is in the window and an inflatable replica of the Europa League trophy is slowly losing air. A woman, all in blue, steps beyond the main door for a cigarette and exhales before inhaling: “Fuckin’ roastin’ in there,” she says. Rangers are drawing 1-1 with Eintracht Frankfurt and the night is alive. Beside her on the pavement, a dozen people stare inwards at the screens.

A little while later, when the final penalty goes the other way, there is a moment of profound silence; no screams, no wailing, no carnage. One lad had stormed out when Aaron Ramsey missed, yelling “fucking disgrace, that” booting at a bin and stomping away as if knowing it was done, but the real end, the end of ends, brings quiet and decompression. Then comes soft applause, a scraping of chairs and a steady exit.

A few sodden bodies drop to the kerb. Heads rest in hands. The air has an edge, but it is like the hangover of anticipation. One minute ago, two, Rangers had a chance but it already feels like a lifetime’s disappointment. Suddenly, a humid embrace: “Chin up, big man! The final! We made it to a final!” And context is important in this 150th anniversary, 50 years since their first and last European trophy and 10 since the bleakness of almost non-existence. A final!

Cristiano Ronaldo told he can leave Manchester United in January

There are five police officers at the top of the street and another gaggle stand on one corner of George Square, where flowerbeds have been fenced off and benches removed, just in case. There are photographers here, ready to capture scenes of celebration which will not come. Instead, two girls hover with flags around their shoulders. “We are Rangers, super Rangers,” one man sings to nobody. “We got beat, fuck it,” another says to his mate. Heads down, into the rain.

Match day in Glasgow, a city with no match. This is Rangers’ home and Rangers are away, but there is still a yearning to be here or somewhere. There is a tremble and charge, the sense of an impending moment — scarf-sellers on corners, souvenir editions of the newspapers — but it is otherworldly, too. People are surging towards emptiness. There is no game at Ibrox, no beam-back, no single place to congregate and little encouragement. Meanwhile, 100,000 have left for Spain.

Still though, they come. At 1pm, blue tops are draining from the Edinburgh rattler and outside Central station, a stall is waiting to snare them, doling out sombreros, T-shirts and banners that read “We’re on our way.” One fella is shouting “Arriba, arriba”, Mexican hat squashed on his head, blurring into “Here we go…” It is seven hours before kick-off and there is a buzz of beer and being there. 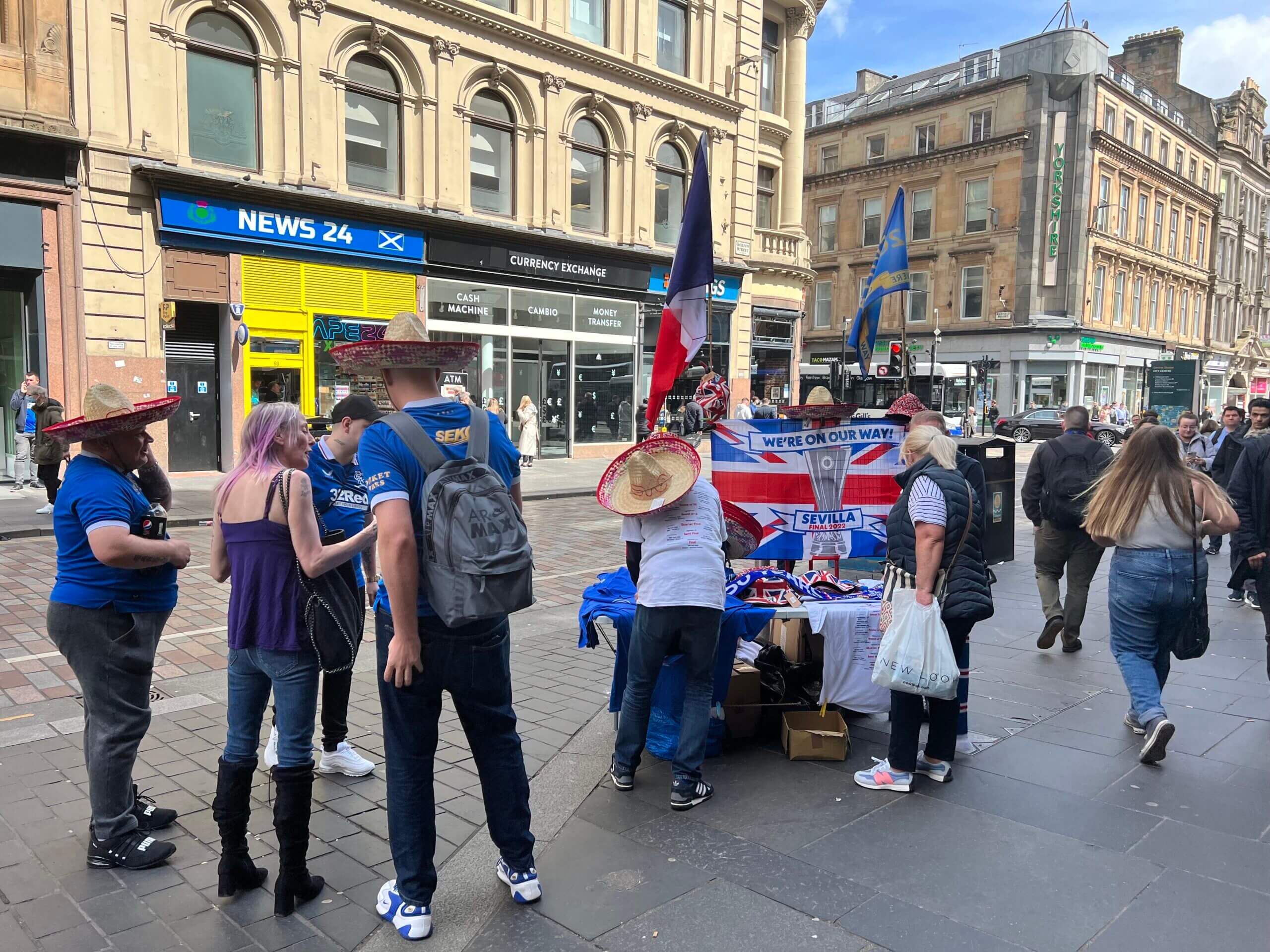 On Sauchiehall Street, the Glasgow Times have a stand. They have produced eight versions of their front page, featuring Giovanni van Bronckhorst, seven players and the same headline: BRING IT ON. For £6.40 you can have the lot, packaged with a cardboard cup. Around the corner, outside the Royal Concert Hall, a small demonstration for Global Justice Now is taking place.

The subway line to Ibrox fills with supporters, singing as the train pulls in. The sun is out and a queue of tens and more waits and fries outside the Louden Tavern, “the quintessential Rangers Supporters pub”. The vibe is 2pm on Saturday — so full it’s one in, one out — but this is Wednesday at 3pm and apparently nobody is working, aside from the bar staff and tat-hawkers.

We are now one in, one out pic.twitter.com/jnaGZ0tlcT

Around the stadium, they are everywhere. Choose your neckwear: “This is our city,” or “These are our colours,” “Alfredo Morelos, Goal Scoring Genius,” or “King Billy on the Wall.” Choose your shirt slogan: “No one likes us, we don’t care” or “Make us dream”. Up the slope to the official club shop and a warning is delivered: “Wouldn’t go in there, mate. Stowed out.” Inside, a blue and orange snake of people completes a circle and threatens to devour itself. The shelves are nearly bare.

A stream of cars blare around, more flags gummed to their back windows. Scarves and shirts are tied around the gates and bouquets of flowers sit in front of John Greig’s statue — the captain who lifted the 1972 European Cup Winners’ Cup — which also commemorates the Ibrox disaster. There are tributes to Jimmy Bell, the kitman who worked for Rangers for more than 30 years and died this month. It is a shrine, a hub and home.

It is also kind of closed. Rangers insisted they did not “have sufficient staffing resources to be able to host such a large event” as a match-day screening. The club, Police Scotland and the local council discouraged supporters from traveling into the city to watch the game. The intention — public safety — was clear enough, but it also made for a peculiar atmosphere. A match and no match; there and not quite there.

As the afternoon grew older, you could feel a quickening mingling with the bustle home from work. Plenty of bars were not showing the final — “no club colours,” pinned on doors — but the rest were rammed. People walked smartly; by 6.30pm you were either on your way somewhere or already there. In George Square, police were confiscating bottles from kids. There is chanting and bopping and “If you hate the fucking Celtic clap your hands.” It is a Rangers day, until it is not. 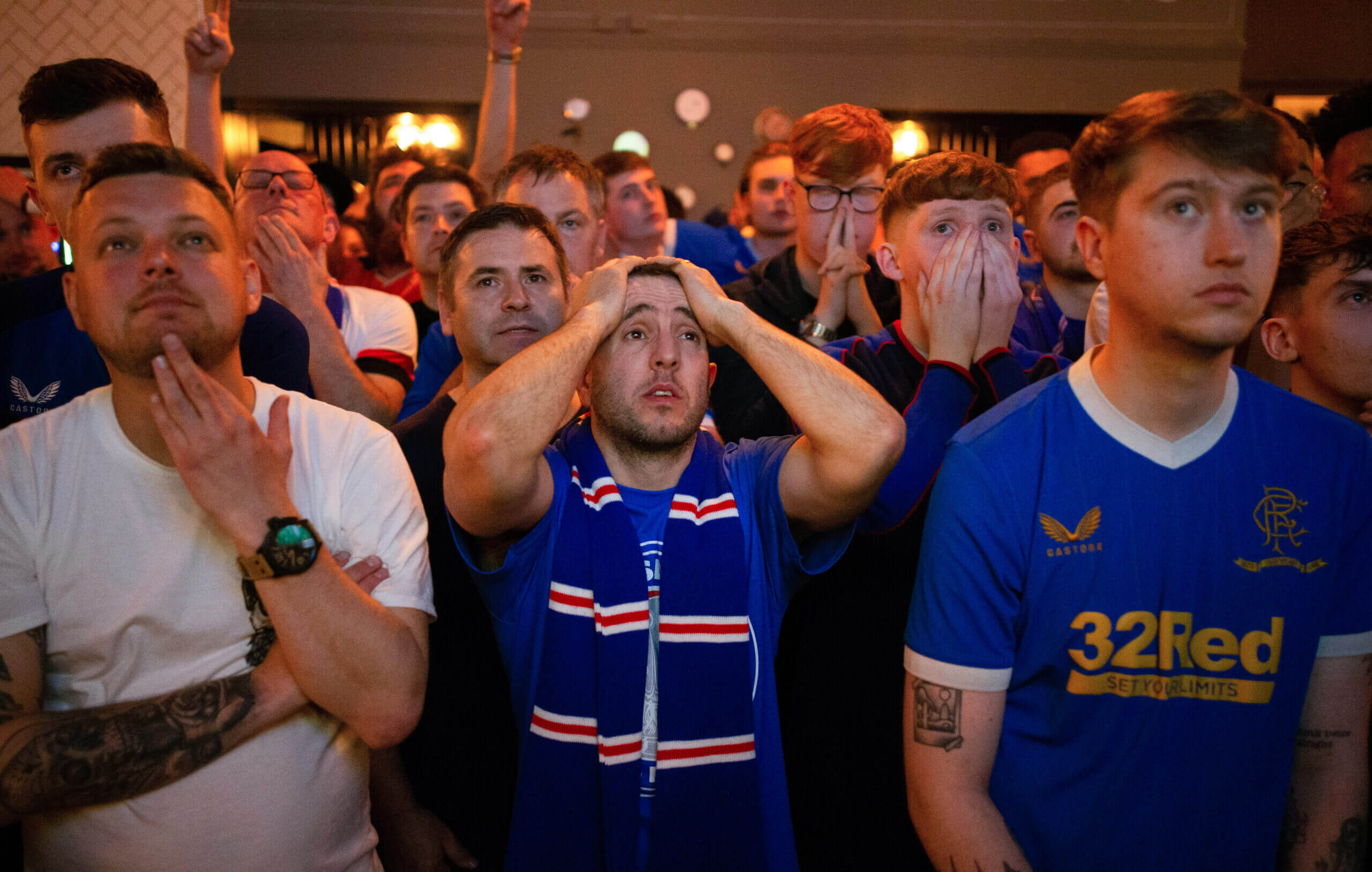 This is where people would throng if Rangers won — hence the benches, the flowerbeds and the photographers — but it remains largely empty. Outdoor drinking benches are dismantled and tidied away, and as the game nears there are now just a handful of youngsters huddled around a statue, listening on the radio. Around the corner, near The Auctioneers, a blue flare is let off and quickly stamped out. It is hardly bedlam.

When it starts, Glasgow — or this part of it — internalises. The roads are now the province of students or tourists and pubs spill inwards not outwards. At Drouthy’s, the dispossessed totter and crane to peer in the windows and it is similar at The Auctioneers, the direction broken only by those piling out for a smoke or a vape. There is a boom of noise when Joe Aribo scores and a heaviness when Frankfurt equalise. Inside, the walls drip.

Extra time makes people restless. “If that had gone in I’d have stripped naked in the street,” slurs a male voice when a chance is missed. Another is blitzed and oblivious to the game, one arm in the air, bastardising ABBA with a discordant “playing in royal blue, Rangers through and through, putting on a show for you”. As penalties approach and faces tighten, he implores them to, “Relax! Remember where we were.”

In this instant, it is difficult. The performance is good, the drama stretches and lengthens, and then the conclusion is brutal, like it always is. One second there is hope and by the next it is as if it never existed, as if this broiling room was never full. A match, then no match. One hand thumps a window, but nothing breaks.